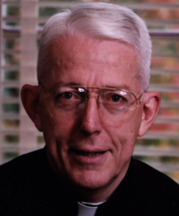 Rev. Edward A. Malloy, C.S.C., president of the University of Notre Dame, was the principal speaker and received an honorary doctor of divinity degree at Aquinas College’s commencement exercises earlier this month. It is his 16th honorary degree.p. Founded by Dominican sisters in 1886, Aquinas College is located in Grand Rapids, Mich., and enrolls some 2,500 students.p. The college’s honorary degree citation said Father Malloy is widely admired as a “teacher and administrator and as a passionate advocate of community service and substance abuse prevention.” It went on to praise him for histireless efforts to strengthen and promote Catholic higher education and civic leadership."p. In his 17th year as Notre Dame’s president, Father Malloy recently announced his decision to step down at the end of his current term, June 30, 2005. Under his direction, the University has experienced rapid growth in its reputation due to substantive improvements in the size and scholarly credentials of its faculty, the academic quality and diversity of the student body, and its financial resources and physical infrastructure.p. Father Malloy is a professor of theology and, throughout his presidency, has continued to teach. Ordained to the priesthood in 1970, he holds three degrees from Notre Dame and a doctorate in Christian ethics from Vanderbilt University.p. Father Malloy’s academic concentration on the interplay of personal morality with public policy and professional ethics informs his own active public life. He is a leading advocate of volunteerism and has served on numerous boards dedicated to community service, including Campus Compact, Boys&Girls Clubs of America and the Points of Light Foundation. He also has worked to combat substance abuse through service to the National Advisory Council on Alcohol Abuse and Alcoholism, the National Center of Addiction and Substance Abuse and other organizations.p.