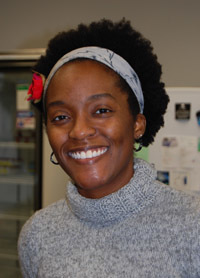 Jada Benn Torres, assistant professor of anthropology at the University of Notre Dame, uses genetics to research the distribution of diseases across populations, with a primary focus on women’s reproductive health. Currently, she is trying to figure out why African-American women are at a higher risk of developing uterine fibroids.

Notre Dame’s first and only molecular anthropologist, Benn Torres recently celebrated the opening of her laboratory, which uses the tools and techniques developed in molecular genetics to address anthropological questions. This is an important new venture for Notre Dame’s Department of Anthropology, which is considered among the most innovative in the nation.

“Many parts of the biological and medical sciences are being transformed because DNA has become so much easier to study than it was in the past, and biological anthropology is no exception,” said department chair Mark Schurr. “The ‘nature vs. nurture’ problem is fundamental to anthropology. In other words, how much of what we are is due to genetics and how much to our environment? Molecular anthropology is at the leading edge of these types of studies and we are thrilled our department is able to participate in this important research and teach our students how it is done.”

Molecular anthropology uses genetics to address questions about what it means to be human, including humans’ place in nature, how we’re related to one another, human adversity, variation and origin. Genetics helps decode what happened in the past and reconstruct populations and their relationship with their environment. Benn Torres is using it to help explain why African-American women develop uterine fibroids at a younger age and with more severity than other populations.

“We don’t know if it’s lifestyle or a combination of lifestyle and some genetic factor,” she said. “I want to examine the variation in genes involved in fibroids among African-Americans and Africans and compare it to other groups to determine if there are any evolutionary reasons those groups are more predisposed.”

Benn Torres, who joined the Notre Dame faculty two years ago, was graduated from Notre Dame and earned her doctorate from the University of New Mexico, where she initially began studying osteology and forensics until she discovered her true calling when a molecular anthropology lab began taking volunteers and she gave it a try.

“I liked the immediacy of the results,” she said. “You get your sample, run your analysis and quickly get your answer.”

A first-generation American, Benn Torres’ parents were born in Trinidad. Her father’s stories about her ancestors inspired her dissertation research on population history in African Caribbean communities.

Benn Torres currently is teaching “Introduction to Anthropological Genetics,” offered for the first time at Notre Dame, and is looking ahead to next fall when she will teach a course that will allow students to use their own DNA to learn the various techniques used in molecular anthropology.

“By the end of the class, the students should be able to place themselves on the tree of humanity,” Benn Torres said.