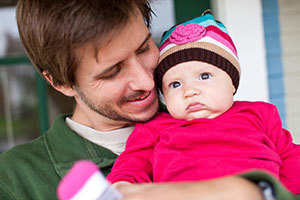 A presentation by University of Notre Dame anthropologist Lee Gettler at the recent “Building Babies” session at the annual meeting of the American Association for the Advancement of Science (AAAS) highlighted new research that contributes a number of novel insights into our understanding of the way men’s biology can respond to the demands of parenthood and drew significant media attention.

Drawing on a longitudinal study of more than 400 men in the Philippines conducted in collaboration with scholars at Northwestern University and the University of San Carlos (Philippines), Gettler’s AAAS talk highlighted recent findings from a November article in which his team showed that new fathers whose testosterone declined reported lower frequency of sex with their partners. Gettler cautioned that the link between the decline in testosterone and sexual activity is unclear.

“While the idea of decreased libido might jump immediately to mind, there is not a strong relationship between testosterone and men’s sex drive,” he said. “That is mostly a popular myth. Men need to have some testosterone for a normal libido, but as long as they have testosterone in the healthy range, the relationship to libido is weak.”

Alluding to his prior findings linking low testosterone and fathers’ caregiving, Gettler went on to emphasize that his findings have nothing to do with child care.

“Does this mean that men who care for children have low testosterone and no sex?” he said. “Or that ‘good dads’ have no sex? No, it has nothing to do with child care. We tested for it.”

Gettler and his colleagues also tested for effects of sleep and stress, but they did not impact the outcome.

During his AAAS presentation, Gettler urged caution against simplistic interpretations of the findings.

“We are talking about complex behaviors — men’s intimate relationship with their partner,” he noted. “We need data on both mom and dad, their mental and physical well-being, and roles in and outside the home to really uncover what factors relate to fathers’ testosterone, partners’ sexual activity or both.” 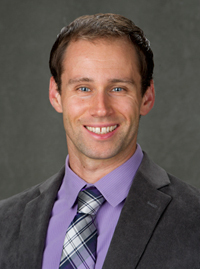 In that vein, Gettler also highlighted his new “Family Interaction Study,” which he recently started with collaborators at the Center for Children and Families at Notre Dame. That team will collect biological, behavioral and mental health data from moms and dads and test for impacts on infant development.

The 2013 study expands on Gettler’s 2011 research in which he and his collaborators were able to follow Filipino men at multiple time points over a five-year period to show that the transition to fatherhood caused men’s testosterone to decline by almost a third. In that 2011 study and a follow-up article in 2012, Gettler also showed that fathers’ testosterone was lower if they were more involved with day-to-day, hands-on care of their children and if they co-slept with their partner and children on the same sleeping surface.

Gettler and his team were also the first scientists to demonstrate that fathers have higher prolactin than non-fathers, with fathers of young infants having especially high levels of the hormone. Prolactin is often thought of as a “female hormone” because it promotes breastfeeding, but Gettler said that it is a very ancient hormone and it is known to help encourage fatherly care in other species.

These shifts in testosterone and prolactin in human fathers are noteworthy because they closely mirror physiological changes seen in other animals among which fathers have evolved to care for their young.

“Fathers are not involved with offspring care among our closest relatives, the Great Apes,” he said. “Thus, thinking about the history of our species, there is little reason to expect men’s biology to respond to fatherhood and, especially, child care unless such parenting behaviors were common during human evolution.

“In other words, based on a number of lines of evidence, these hormonal changes in fathers seem to reflect that evolution has shaped men’s biology to help them respond to the demands of parenthood.”

Gettler argues that this research shows the practical utility of applying evolutionary perspectives to day-to-day life. In particular, it shows us that the notion that fathers are capable of taking care of their kids is likely an ancient phenomenon. Gettler’s results and similar patterns from other cultures around the world suggest there is antiquity to the roles of fathers as invested caregivers, and that has important implications for the ways in which men see themselves and their roles.

“Our research facilitates men’s understanding of their own ‘built-in’ biological parenting capabilities, which is highly applicable to the day-to-day lives of millions of men,” he said. “Men have long been made to feel that they are bumbling and unprepared to care for their children, and that characterization is a disservice to the many, many fathers who feel either misrepresented or undermined by that image.”

Gettler’s research presentation at the AAAS Annual Meeting in Chicago was reported on by a variety of international media, including The Guardian, The Australian and India Today.