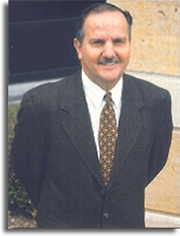 Juan Méndez, director of the Center for Civil and Human Rights at the University of Notre Dame for the past five years, was named this week to a new United Nations position by U.N. Secretary-General Kofi Annan.p. A lawyer who twice was imprisoned in his native Argentina for political and professional activities, Méndez was appointed special adviser on the prevention of genocide. His primary responsibilities will be to provide early warning about situations anywhere in the world that could result in genocide and to recommend how the United Nations can prevent such events.p. The appointment follows a pledge by Annan earlier this year to mark the 10th anniversary of the Rwandan genocide with the appointment of an official to collect data and monitor any serious violations of human rights or international law that have a racial or ethnic dimension and could lead to genocide. U.N. Security Council approval of the appointment is considered a formality.p. Méndez was appointed professor of law and director of Notre Dames Center for Civil and Human Rights in 1999. He stepped down as director in May and is on a two-year leave of absence from the faculty, serving as president of the International Centre for Transitional Justice.p. A native of Lomas de Zamora, Argentina, Méndez has dedicated his legal career to the defense of human rights and has a long and distinguished record of human rights advocacy throughout the Americas.p. As a result of his representation of political prisoners in the 1970s, he was arrested, tortured and subjected to administrative detention for 18 months by the Argentinean military junta. During this period, Amnesty International adopted him as aPrisoner of Conscience.p. After his release, Méndez moved to the United States and served for 15 years with Human Rights Watch, specializing in Western Hemisphere issues. He served from 1996 to 1999 as executive director of the Inter-American Commission on Human Rights.p. Méndez received Notre Dames Rev. William M. Lewers, C.S.C., International Award for Distinguished Service in Civil and Human Rights in 1998. In addition to his work in the Notre Dame Law School, he is a faculty fellow of the Universitys Kroc Institute for International Peace Studies.p. Méndez earned his law degree in 1970 from Stella Maris University, a Catholic institution in Mar del Plata, Argentina.p.