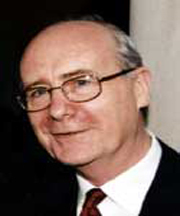 Noel Fahey, the Irish ambassador to the United States, will give a lecture on the relationships among Ireland, Europe and America at 3 p.m. Friday (Oct. 1) in the auditorium of the University of Notre Dames McKenna Hall.p. Fahey’s address will mark the inauguration of the Universitys new Department of Irish Language and Literature and the launching of two books by Notre Dame faculty members, “Native and Natural Aspects of the Concepts of ‘Right’ and ‘Freedom’ in Irish,” by Peter McQuillan, associate professor of Irish language and literature, and “Maeve Brennan: Homesick at the New Yorker,” by Angela Bourke, visiting professor of Irish language and literature.p. Fahey, a native of Roscommon, Ireland, has represented his country to the United States since 2002. He joined the Irish Foreign Service in 1974 and served in New Delhi from 1976 to 1980 and in the Irish delegation to the European Union in Brussels from 1982 to 1986. Appointed his nations ambassador to Germany in 1998, he oversaw the transferring of the Irish embassy to Berlin following the collapse of the Berlin Wall.p. The Department of Irish Language and Literature, established last spring in the Keough Institute for Irish Studies, is the first of its kind in the United States. The department is among the outgrowths of an interest in the Irish language which has become increasingly popular at Notre Dame since the Keough Institute was founded in 1992. More than 120 students are now enrolled in Irish language classes.p. _Contact: Éamonn Ó Ciardha, program coordinator of the Keough Institute of Irish Studies, at 574-631-6250 or OCiardha.1@nd.edu _ p.