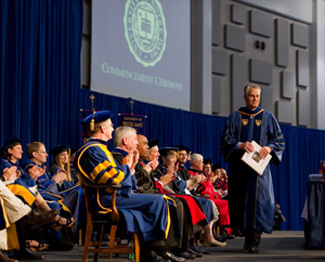 Timothy Roemer, United States Ambassador to India, delivered the Commencement address. He also was recognized as the recipient of the Graduate School’s Distinguished Alumnus Award.

Roemer, who earned master’s and doctoral degrees in political science from Notre Dame, told the graduates that that they were leaving Notre Dame prepared to take on the challenges of the world, although the world is a much different place than it was when he graduate from the University 25 years ago.

“Twenty-five years ago, the major events of the day were driven and influenced by nations and governments,” he said. “Yet today, transnational actors and actions play just as important a role as governments and nations in ways that are often unpredictable and unannounced.

“A pastor in Florida can threaten to burn a Quran, which is picked up and broadcast by an Iranian news channel that is watched in Kashmir, resulting in protests, riots and several needless deaths.

“Social media like Facebook, which was intended to help you stay in touch with your friends, can be used to keep revolutions alive and bring down a government as we saw by recent events in the Middle East.”

Roemer also described today’s world as one of dynamic, overlapping circles, with the intersection of the circles signifying the benefits derived from collaborations and partnerships between countries. Citing the so-called “Arab spring,” he also today’s world as one characterized by the “relentless march of democracy.”

“These are some of the characteristics of the world that you are about to enter as you leave Notre Dame,” the ambassador told the graduates. "Who knows how it will look in 25 years when one of you is standing in my shoes and giving this commencement address?

“Regardless of how the world looks or changes in 25 years, you have the education to take on the challenges of the world today and in the future. You have the abilities and talent to see and take advantage of the opportunities that will be present from an ever-changing world. And you have the Notre Dame values to make a difference, to make the world a better place.” 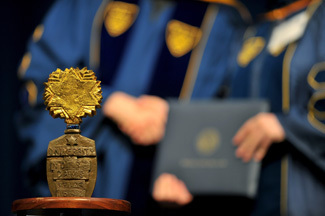 Sagnik Basuray, a chemical and biomolucular engineering Ph.D. invented a hand-held genetic biosensor for pathogens that may have profound effects in the developing world. He is currently a research scientist at 454 Life Sciences, a Roche Company, where he is involved in the research and development of next-generation rapid gene sequencing technologies.

In the humanities, the recipient was Matthew Bates, a Ph.D. in theology who has made diverse and distinctive contributions across the field of Christian origins, with a special emphasis on St. Paul’s method of interpreting the Hebrew scriptures. He will assume a tenure-track position as an assistant professor at Quincy University in Quincy, Ill.

Natalie Griffiths, a biology Ph.D. whose research provides new insights into the novel pathways of carbon cycling in agricultural streams of the Midwestern United States, and how the byproducts of genetically modified corn left on field after harvest may impact ecosystems, was the recipient in the sciences. She is completing a prestigious postdoctoral position at the Oak Ridge National Laboratory in Tennessee, where she is researching the effects of climate change on nutrient cycling in spruce peat lands and the impacts of bioenergy feed stocks on stream and groundwater quality.

In the social sciences, Melissa George, a psychology Ph.D. whose research focuses on the examination of complex nature of family relations, marital conflict and child adjustment, was the recipient. She is now a postdoctoral research associate at the University of South Carolina, where she continues her work in child psychology, focusing on prevention and intervention programs for youth and families.

Marvin Miller, George and Winifred Clark Professor of Chemistry and Biochemistry, was recognized as the University’s 2011 Rev. James A. Burns, C.S.C. Graduate School Award recipient. The award is given annually to a faculty member for distinction in teaching or other exemplary contributions to graduate education and honors the first Notre Dame president with an advanced degree.

Miller has directed more than 75 past and current graduate students and more than 59 postdoctoral fellows. He also has served on more than 100 additional theses and defense committees. His students are top scientists-researchers at many universities and corporations, including Abbott Laboratories, Bristol-Meyers Squibb, Monsanto, Eli Lilly, Johnson & Johnson, OSI Pharmaceuticals Inc., and Procter & Gamble.

According to Kenneth Henderson, chair of the Department of Chemistry and Biochemistry, this success can be attributed to Miller’s emphasis on quality within his research programs and his rigor in training his students to be excellent communicators.

William Carbonaro, an associate professor in the Department of Sociology was named 2001 Notre Dame DGS of the Year, while Shari Herman of the Physics Department was selected to receive the 2001 Graduate Administrative Assistant Award.