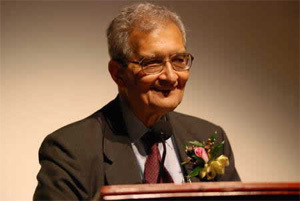 The Nobel Prize-winning economist and philosopher Amartya Sen will receive the 2012 Notre Dame Award for International Human Development and Solidarity in recognition of his contributions to the field of human development. The award will be presented at a campus ceremony on April 17.

A visionary and spirited advocate for the world’s poorest people, Sen has worked for 50 years to illuminate the true causes of poverty and suffering. He has transformed how development is defined and measured by focusing attention on positive freedoms and human capabilities rather than income alone.

“Sen’s work puts the human person at the center of the development process,” says Rev. Robert A. Dowd, C.S.C., director of the Ford Family Program in Human Development Studies and Solidarity, which bestows the award.

“The concept of ‘development as freedom’ articulated by Sen resonates with the values of the Ford Program, which—inspired by Catholic Social Teaching—include human flourishing, local ownership and community-driven development,” explains Dowd.

“Far too many people suffer from insufficient income. However, we believe that income is a means to development rather than the end goal.”

While on campus, Sen will deliver the Rev. Theodore M. Hesburgh, C.S.C., Lecture in Ethics and Public Policy, the 18th annual lecture in a series established by the Kroc Institute for International Peace Studies. Open to the public, the lecture is a free but ticketed event. It will take place at 5:30 p.m. April 17 in the Leighton Concert Hall of the DeBartolo Performing Arts Center.

The recipient of the 1998 Nobel Prize for his innovations in welfare economics, Sen is heralded as “the conscience of economics.” His revolutionary work helped to shape the UN’s human development index, a widely used composite statistic for measuring well-being and quality of life.

Delving into “the underside of economics,” Sen has tackled issues of food distribution, global health, violence and peace, education and gender inequality. His research merges theoretical and empirical analyses on poverty and its complex causes with advocacy. His influential books, including the landmark “Development as Freedom” (1999), are read in more than 30 languages around the world.

Sen is Lamont University Professor at Harvard University, where he also holds appointments in economics and philosophy, and has taught at major universities around the world. A citizen of India, he is a foreign honorary member of the American Academy of Arts and Sciences and an honorary adviser to Oxfam International.

The Notre Dame Award for International Human Development and Solidarity recognizes individuals or organizations that stand in solidarity with those in deepest need, working alongside them as they become agents of their own change. Recipients are honored for substantial contribution to the promotion of international human development through research, practice, public service or philanthropy.

Housed in the Kellogg Institute for International Studies at the University of Notre Dame, the Ford Program promotes the interdisciplinary study of human development. Through research, teaching and community engagement, the Ford Program aims to understand extreme poverty and the conditions that affect human welfare.

Tickets for the Hesburgh Lecture will be available beginning at  noon on March 1 (Thursday). You can reserve two tickets per person by  visiting the DeBartolo Performing Arts Center Ticket Office from noon-6  p.m. Monday through Friday or by calling 631-2800.