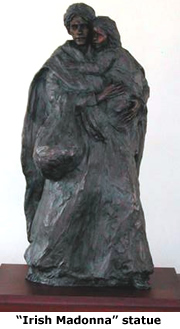 TheIrish Madonna,a bronze statue of a 19 th century Irish immigrant woman carrying a baby, was installed last month in the south end of the Eck VisitorsCenter atrium at the University of Notre Dame.

The statue is a gift to the University from 1957 Notre Dame alumnus Frank O’Brien of Albany, N.Y.; his wife, Mary Beth; and their daughters, Constance, Maureen, Kathleen, Cara and Patricia, all of them Notre Dame alumnae.Their gift memorializes their son and brother, Frank OBrien III, a 1988 Notre Dame graduate who died of cancer last December.

TheIrish Madonnais a component of a larger bronze monument called theIrish Memorial,by Santa Fe, N.M., sculptor Glenna Goodacre, which was unveiled in Philadelphia in 2002 and later installed at Penns Landing in that city to commemorate the 150th anniversary of the vast Irish migration to America in the wake of the famine which killed more than 2 million Irish people in their homeland.TheIrish Memorialfeatures 30 life-sized figures rushing to disembark from an arriving ship.The first of these to set foot in theNew Worldis theIrish Madonna.The bronze cast of the figure now in the Eck VisitorsCenter is one of an edition of 15.

Goodacres other works include the Vietnam Womens Memorial in Washington, D.C., which was dedicated in 1993, and the likeness of the Shoshone explorer Sacagawea for the dollar coin minted in 1999.

The Eck VisitorsCenter is open Monday through Saturday from8 a.m.to5 p.mandSunday from10 a.m.to5 p.m.