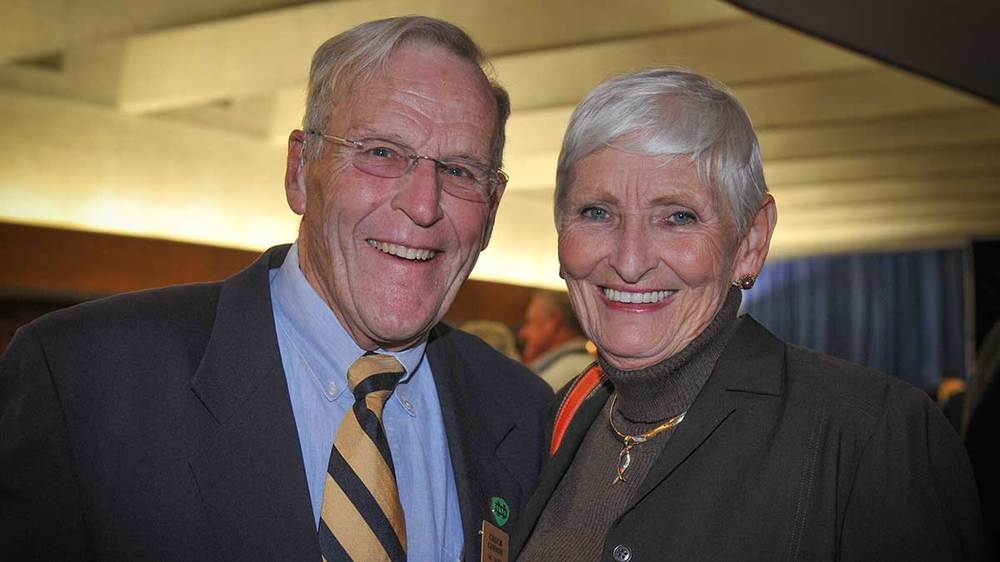 The Notre Dame Alumni Association announces the creation of The Chuck and Joan Lennon Gospel of Life Initiative, a set of programs aimed at activating the University’s robust clubs network to be forces for good in upholding the value of life at all stages. The initiative was co-created with Chuck Lennon, who served as associate vice president of University Relations and executive director of the association for 31 years, and his wife, Joan. Lennon retired in 2011.

In concert with the Catholic Church's longstanding defense of all human life, the Gospel of Life Initiative seeks to provide support to vulnerable populations around the world. Groups such as the unborn and their families, the elderly and terminally ill, immigrants and refugees, the disabled, the imprisoned, the poor, and all whose human dignity is at risk may be served by this initiative.

A portion of the Chuck and Joan Lennon Endowment for Excellence is funding the initiative. The endowment was established by Chuck Lennon's family and friends in 2007 at his 25th anniversary of leading the association and further strengthened in 2011 by his classmates during his 50-year Reunion. The fund will continue to support other alumni programming for years to come.

“We in the association are so thankful that Chuck and Joan’s legacy of service to the vulnerable in the name of Notre Dame continues to blossom,” said Dolly Duffy, executive director of the Notre Dame Alumni Association and associate vice president for University Relations. “The Chuck and Joan Lennon Gospel of Life Initiative is a beautiful testament to Chuck and Joan’s commitment to upholding the sanctity of human life.”

It is fitting that the initiative’s outreach is dependent upon the vast network of Notre Dame clubs in cities and towns around the world. Under Lennon’s direction the number of clubs almost doubled during his tenure — growing from 151 to 276 at his retirement in 2011.

“Joan and I have been blessed by our involvement with Notre Dame,” Lennon said. “Our Lady’s University is truly our home, and we are grateful to be helping those in most need in her name. This model of empowering our alumni and friends in Notre Dame clubs worldwide to further act to support life in their local communities is so gratifying to us.”

Two programs will launch in 2018 under the initiative’s umbrella.

With the Lennon Life Prize, Notre Dame clubs are invited to develop ideas tailored to the needs of their communities in support of a wide range of pro-life causes and organizations. A panel of campus partners will review submissions, and the Alumni Association will provide monetary awards for a number of winning submissions.

“We are excited to engage the ingenuity of our club partners,” said Dan Allen, the association’s spirituality program director. “We hope to recognize a variety of worthy ideas that actively give witness to a consistent ethic of life in many situations. Projects such as a fundraising dinner for a local crisis pregnancy center, support groups for those affected by crime, a lecture series on an emerging life issue, or regular visits and volunteer assistance to the elderly are only some of the many possibilities.”

A call for submissions is planned for April 2018 with the first monetary prizes being awarded in October 2018, which is also Respect for Life Month.

A second program within the initiative is called Project Mom. The intent of the effort is to support expectant mothers in need of material and relational support. Clubs, utilizing funding from the Alumni Association, will partner with churches, crisis pregnancy centers, and community organizations to host baby showers for these mothers. The program will begin in January and aims to support as many mothers and families as funding allows.

Lennon earned his bachelor’s degree from Notre Dame in 1961 and played for three seasons and received two monograms in baseball. He earned a master’s degree in guidance and counseling from the University in 1962 and served in the Notre Dame athletics department from 1961 to 1966 as an assistant basketball and baseball coach and an assistant ticket manager.

Joan Lennon was named an honorary alumna of the University in 2008. In 1976, she co-founded Shamrock Pre-School, which remains in existence today. Joan’s experience with treatment and survivorship of breast cancer in 1994 was the impetus that motivated her to become a leader in the fight against it. In 2001, Lennon founded the Women’s Task Force of Saint Joseph Regional Medical Center, a volunteer group that provides support for cancer patients in St. Joseph County in Indiana. She served as both director and an active participant.

Lennon and his wife, Joan, have five children:  Kevin, Brian, Sean, Colleen and Molly. They also have 16 grandchildren.