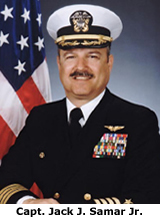 Honored for his distinguished military service,Samarreceived his commission through the Universitys ROTC program in 1971, earned his naval flight officer wings the following year and was assigned to the A-6 Intruder as a bombardier/navigator.

During his naval career Samar twice sailed around the world, participated in the evacuation ofSaigon, was deployed twice for operations associated with the Iranian Hostage Crisis, and commanded the A-6 squadron, VA-155 (The Silver Foxes).

Samarcurrently is working in the private sector as a vice president for Computer Systems Center Inc.He also is a member of the Board of Advisors of the SemperComm Foundation, a non-profit organization founded to boost the morale ofU.S.service members stationed overseas by helping them communicate with loved ones back home.

Awarded a monogram as a sprinter on the track team at Notre Dame, Samar earned masters degrees fromSalveReginaCollegeand theNavalWarCollege.

The Corby Award was established by the Alumni Association in 1985 in honor of Notre Dame’s third president, who was a celebrated Civil War chaplain of the Union army’s Irish Brigade.