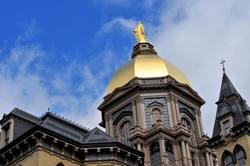 Roxanne M. Martino, president and chief executive officer of Aurora Investment Management, was elected to the University of Notre Dame’s Board of Trustees at the Board’s spring meeting, April 29.

In other Board action:

In a meeting of the Fellows of the University on April 28, William M. Goodyear, chair and chief executive officer of Navigant Consulting Inc., and Rev. Timothy R. Scully, C.S.C., professor of political science and director of the Institute for Educational Initiatives at Notre Dame, were elected to additional six-year terms as Fellows.

In addition, John Calcutt, recently elected as president-elect of the Notre Dame Alumni Association, will serve a two-year ex officio term on the Board.

Martino joined Aurora Investment Management in 1990 and now leads the Chicago firm, which manages more than $8 billion in funds of hedge funds designed to meet various investment mandates, including multi-strategy formats. She previously worked for seven years as a senior manager with Coopers & Lybrand and for more than six years at Grosvenor Capital Management, where she was a general partner.

Martino earned a bachelor’s degree in business from Notre Dame and a master’s of business administration degree from the University of Chicago. She has served as a member and chair of the advisory council for Notre Dame’s Mendoza College of Business, is a member of the Executive Education advisory board at Notre Dame, and serves on the investment subcommittee of the board of directors of Catholic Relief Services.

After earning a bachelor’s degree in finance and Spanish from Notre Dame in 2004, DeWalt served as a nuclear submarine officer on the USS Cheyenne and as an assistant professor of naval science in the Notre Dame ROTC program. He currently is enrolled in the master of business administration program at the Stanford University Graduate School of Business.

Macaluso earned a bachelor’s degree in English from Notre Dame in 2005 and a master’s degree in education through the University’s Alliance for Catholic Education (ACE) program in 2007. As an ACE participant, she taught English for two years at Ascension Catholic High School in Donaldsonville, La., and she now is an English teacher at Fenwick High School in Oak Park, Ill.

Chaired by Richard C. Notebaert, the Notre Dame Board of Trustees now is composed of 48 active and 44 emeritus members.