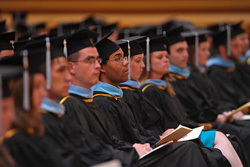 The University of Notre Dame’s Alliance for Catholic Education (ACE) conducted its 15th Commencement exercises July 10 (Saturday) with one of the nation’s most distinguished leaders in the field of education addressing the 106 graduates who received master’s degrees.

Anthony Bryk, president of the Carnegie Foundation for the Advancement of Teaching, praised the ACE graduates for embracing their formation as Catholic school teachers and principals in the spirit of a vocational call. Watch Speech

He quoted to the audience in the DeBartolo Performing Arts Center the words of President John F. Kennedy, from the 1960 Inaugural Address: “Let us go forth to lead the land we love, asking his blessing and his help, but knowing that here on earth God’s work must truly be our own.”

Bryk also recognized ACE’s preparation of tomorrow’s teachers and leaders in terms of the skills and apprenticeship experiences imparted, but he told the graduates the program’s distinctive characteristic is “formation of your identity as a Catholic educator,” leading to “a special role you take on in the lives of your students.”

The graduates comprised 85 members of the teacher formation class—the “Service through Teaching” program—who are collectively known as ACE 15, as well as the latest, 21-member cohort from ACE’s Mary Ann Remick Leadership Program (known as ALP 7) focused on the formation of Catholic school principals.

Also as part of the event, James T. and Maureen O. Hackett, of Houston, Texas, received the 2010 Notre Dame Award for Catholic Education. Rev. Timothy R. Scully, C.S.C., founder of ACE and director of the University’s Institute for Educational Initiatives (IEI), described the Hacketts as outstanding supporters of Catholic education from the grade school to university level, with a generous commitment to the work of ACE and long histories of faith-filled service to communities and civic and charitable causes.

Two members of former graduating classes—Jennifer Beltramo, from both ACE 9 and ALP 8, and Antonio Ortiz, from ACE 5—were this year’s recipients of the Michael Pressley Award for Excellence in Catholic Education. Both have distinguished themselves through long-term dedication, overcoming challenges for the sake of children in the classroom and beyond—Beltramo at Mother of Sorrows School in South Los Angeles and Ortiz at Cristo Rey High School in Chicago.

Since its inception some 17 years ago, the ACE Service through Teaching program has grown from a service initiative composed of a handful of Catholic school educators to a movement that has commissioned 1,200 teachers to serve Catholic schools throughout the United States. The Mary Ann Remick Leadership Program has prepared more than 150 faith-filled educators now serving as school leaders in 59 dioceses.

The annual ACE Summer Forum, which attracted more than 100 participants from around the country to campus during the Commencement weekend, focused on progress in the Catholic School Advantage campaign to improve education opportunities for Latino children. The campaign is ACE’s ambitious follow-up to the final report of the Notre Dame Task Force on the Participation of Latino Children and Families in Catholic Schools. Learn about the initiative at catholicschooladvantage.nd.edu.

ACE and the IEI, a Notre Dame academic unit of which ACE is part, undertake numerous formation, research and professional service initiatives to support and strengthen Catholic education. Find out more at ace.nd.edu and iei.nd.edu.