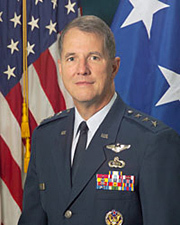 Lt. Gen. Ted F. Bowlds, commander of the Electronic Systems Center (ESC) at Hanscom Air Force Base in Bedford, Mass., will deliver the Commissioning Ceremony address to University of Notre Dame ROTC students at 9 a.m. May 16 (Saturday) in the DeBartolo Performing Arts Center.

Bowlds manages the ESC, which acquires command and control systems for the Air Force and comprises some 12,000 people who oversee more than $3 billion in programs annually at six sites throughout the United States.

Formerly a flight test engineer on the F-117, Bowlds also has served as avionics program manager on the B-2; bomber branch chief at the Pentagon; chief of advance medium range, air-to-air missile development in the AMRAAM System Program Office; commander of the Rome Laboratory in Rome, N.Y.; and deputy director of Global Power Programs with the Office of the Assistant Secretary of the Air Force for Acquisition.

Prior to assuming his current position, Bowlds was commander of the Air Force Research Laboratory at Wright-Patterson Air Force Base in Ohio. He was responsible for managing the Air Force’s $2 billion science and technology program as well as additional customer-funded research and development of $1.7 billion.

Bowlds was graduated from Mississippi State University in 1975. He earned master’s degrees in electrical engineering from the Air Force Institute of Technology and engineering management from the University of Dayton. His military education includes Squadron Officer School, Air Command and Staff College, Defense Systems Management College and Air War College.