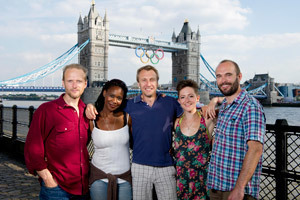 Actors From The London Stage (AFTLS), a self-directed ensemble of five professional British actors, will present William Shakespeare’s comedy “The Merchant of Venice” in historic Washington Hall on the University of Notre Dame’s campus at 7:30 p.m., Sept. 12-14 (Wednesday-Friday).

One of Shakespeare’s best-known comedies, “The Merchant of Venice” has been arousing controversy for centuries with raucous and gentle comedy, tender poetry and its struggle with mercy and justice. This comedy of religion and race collides with love, family and justice and the currency of society and humanity in this vibrant production by five actors.

AFTLS is the national outreach program of Shakespeare at Notre Dame. This unique educational program was developed in 1975 by Homer Swander at the University of California, Santa Barbara. The theater company is now based in London and at Shakespeare at Notre Dame. The artists, composed of five British Shakespearean actors from such companies as the Royal Shakespeare Company, the Royal National Theatre of Great Britain, and Shakespeare’s Globe, among others, devote a large part of their time to lectures, workshops, seminars and informal meetings with students. Their stay provides students and faculty with a unique opportunity both to observe extraordinary performances and to discuss literature and the art of theater in depth with some of the most talented artists from some of the most important theater companies in the world.