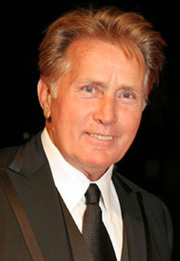 Actor and human rights activist Martin Sheen has been awarded Notre Dame’s Laetare Medal for 2008. He will receive the medal, the oldest and most prestigious honor given to American Catholics, during the University’s 163rd Commencement exercises May 18 (Sunday).

“As one of our nation’s most recognizable and accomplished screen actors, Martin Sheen has achieved a level of celebrity that few Americans enjoy,” said Rev. John I. Jenkins, C.S.C., University president. He has used that celebrity to draw the attention of his fellow citizens to issues that cry out for redress, such as the plight of immigrant workers and homeless people, the waging of unjust war, the killing of the unborn and capital punishment. We welcome the opportunity to lift up his example for our Church, our country, and our students."

A native of Dayton, Ohio, Sheen was born Aug. 3, 1940, one of 10 children of a Spanish-born father and an Irish-born mother. His legal and baptismal name is Ramon Gerardo Antonio Estevez, but he later adopted his stage name in honor of the pioneering televangelist Archbishop Fulton Sheen.

After his graduation from Chaminade High School in Dayton, Sheen claims to have intentionally failed his entrance examination for the University of Dayton in order to pursue an acting career of which his father disapproved. Borrowing money from a priest friend, he went to New York City, working with Julian Beck’s Living Theatre and eventually landing a widely acclaimed role in the 1964 Broadway play, The Subject Was Roses. During this period, he became fascinated by Dorothy Day and the Catholic Worker Movement, visiting and volunteering at the Catholic Workers houses on Manhattan’s Lower East Side.

Sheen has played numerous award-winning television and film roles, most notably an amoral young murderer in the 1973 film Badlands, a disintegrating American soldier in the 1979 film Apocalypse Now, a bemused journalist in the 1982 biopic Gandhi, and the itinerant French co-founder of the Catholic Worker movement, Peter Maurin, in the 1996 film Entertaining Angels. From 1999 to 2006, on NBC’s widely acclaimed television series “The West Wing,” he played a soulful American president who was a Notre Dame graduate.

A self-described Catholic peace activist, opponent of abortion and student of Catholic social teaching, Sheen acknowledges his spiritual debts to St. Francis of Assisi, Mother Theresa of Calcutta, Dorothy Day, Rev. Daniel Berrigan, S.J., and the late labor leader Cesar Chavez. He often has been arrested as a participant in nonviolent demonstrations against various U.S. military policies and has enthusiastically donated money, time and his celebrity to such causes as the alleviation of poverty and homelessness, human rights for migrant workers, and environmental protection.

The Laetare (pronounced Lay-tah-ray) Medal is so named because its recipient is announced each year in celebration of Laetare Sunday, the fourth Sunday in Lent on the Church calendar. Laetare, the Latin word for rejoice, is the first word in the entrance antiphon of the Mass that Sunday, which ritually anticipates the celebration of Easter. The medal bears the Latin inscription,Magna est veritas et prevalebit (Truth is mighty, and it shall prevail.)

Established at Notre Dame in 1883, the Laetare Medal was conceived as an American counterpart of the Golden Rose, a papal honor which antedates the 11th century. The medal has been awarded annually at Notre Dame to a Catholic whose genius has ennobled the arts and sciences, illustrated the ideals of the Church and enriched the heritage of humanity.