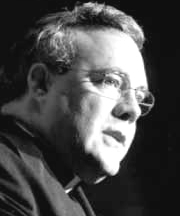 Rev. Robert A. Sirico, co-founder and president of the Acton Institute, will present a lecture titledCan a Rich Man Go To Heaven?at 4 p.m. April 5 (Wednesday) in the Jordan Auditorium of the Mendoza College of Business at the University of Notre Dame.

During his studies and early ministry, Father Sirico found that religious studies students received little training in fundamental economic principles and, as a result, were poorly equipped to understand and address social problems. To meet the need, he co-founded the Acton Institute in 1990.

The Acton Institute for the Study of Religion andLibertyis named after the English historian Lord John Acton, best known for his famous statement,Power tends to corrupt, and absolute power corrupts absolutely.Inspired by his work on the relation between liberty and morality, the Acton Institute seeks to articulate a vision of society that is both free and virtuous.

As president of the Acton Institute, Father Sirico lectures at colleges, universities and corporations throughout the world. His writings on religious, political, economic and social matters have been published in The New York Times, Wall Street Journal, London Financial Times, National Review and Forbes. He has appeared on CNN, ABC, the BBC, NPR and CBSs60 Minutes,among others.