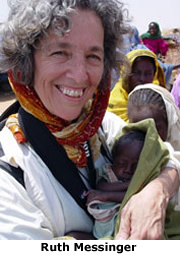 Ruth Messinger, president of American Jewish World Service (AJWS), will deliver a lecture titledBearing Witness: Crisis in Darfurat 8 p.m. March 28 (Wednesday) in the auditorium of the<?xml:namespace prefix = st1 ns = “urn:schemas-microsoft-com:office:smarttags” />EckVisitorsCenterat the University of Notre Dame. She will give a firsthand account of the ongoing crisis that has been raging in the Darfur region of westernSudansince 2003.

Part of the Liss Lecture Series, the event is presented by the Department of Theology and the ND Holocaust Project in association with Africa Awareness Week. It is free and open to the public and will be followed by a reception.

The Sudanese regime and its militias have been denounced by governments around the world forethnic cleansingof largely Muslim villages. The United Nations estimates that 4 million people currently are in desperate need of aid while death tolls as high as 450,000 have been reported.

Messinger has visited theDarfurregion twice as part of AJWSs aid and advocacy campaigns for Sudanese citizens. She will discuss what must be done to stop the crisis while also reflecting on her personal experiences inSudan.

After 12 years on the New York City Council and eight years asManhattanborough president, Messinger was the first woman to secure the Democratic Partys nomination for mayor in 1997. She currently is a visiting professor of urban policy and politics atHunterCollegeinNew York City.

In February 2006, Messinger received the Jewish Council for Public Affairsprestigious Albert D. Chernin Award in honor of her tireless work on theDarfurcrisis. For the past six years Messinger has been named to The Forward 50, citing her as one ofthe 50 most influential Americans of Jewish faith. She received top five recognitions in 2005 and 2006.

Founded in 1985, American Jewish World Service is an international development organization motivated by Judaisms imperative to pursue justice. Dedicated to alleviating poverty, hunger and disease among the people of the developing world regardless of race, religion or nationality, AJWS supports more than 200 grassroots social change projects throughout the world.