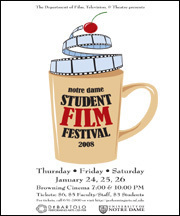 The University of Notre Dame will present its 19th annual Student Film Festival from Jan. 24 to 26 (Thursday to Saturday) at 7 and 10 p.m. each evening in the Browning Cinema of the DeBartolo Center for the Performing Arts.

Admission is $6 for the general public, $5 for faculty and staff and $3 for students. Tickets are available by calling 574-631-2800 or visiting http://performingarts.nd.edu on the Web.

The approximately 110-minute presentation will exhibit 15 short features that represent the film and video work of Notre Dame students training for careers in film and television. Each film was completed in about two months as a component of intermediate and advanced film and video production courses offered by the Universitys Department of Film, Television and Theatre. All films are shot on location, most in the South Bend area, and feature the acting talents of local residents, as well as Notre Dame students and faculty.

This years featured films include:

More information about the event is available on the Web at www.nd.edu/~ftt .