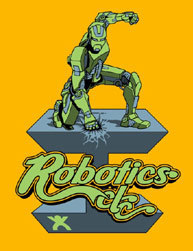 Two brand-new trophies on display in the entrance to the Robinson Community Learning Center (RCLC) are evidence of the quick success of the center’s newly formed Lego robotics team"I-Robotics."

To promote science and engineering among an often overlooked group of kids, G. David Moss, assistant vice president for student affairs at the University of Notre Dame, in September formed the nine-member team, which is comprised of six youths who regularly attend the Robinson Center, two of his own children and another who attends his church.

“The kids create robots out of Lego pieces and use the robots to perform certain tasks on a mission board,”Moss explained.“The missions all relate to a theme, and this year’s topic is the climate and how it impacts the local environment.”

With the exception of Moss’ son Philip, whose former home-schooled team placed second at the robotics world championship, none of the kids had any prior experience.Two months after forming, they competed against two dozen teams at the FIRST Lego League Qualifying Tournament on Nov. 22 in Elkhart, Ind.

Their research placed in the top three, and they received trophies for"Robot Performance"and"Against All Odds,"which goes to a team that overcomes an unusual challenge or disadvantage.
Perhaps more importantly, they qualified for the state competition Dec. 13 in Ft. Wayne, Ind., at which they competed against 45 teams and won a third-place award for their research.

“The group worked diligently researching various aspects of our climate,”said Velshonna Luckey, RCLC’s associate director of children’s programming.“The next step was for them to identify a problem common to this area and develop an innovative solution to address it.I-Robotics selected flooding of the St. Joseph River and devised a multi-faceted levee system that would produce hydro-electricity for city consumption, purify and filter some of the floodwater for commercial use and allow the city to store water for draught seasons.”

Their plan came together after a considerable amount of research.

Especially proud of his all African-American team’s"Against All Odds"honor, Moss acknowledges he was inspired to develop the program at the Robinson Center because of inequity he noticed while attending Philip’s competitions years ago.He says it still exists today.

“In my heart of hearts, I realize that the teams involved are not intentionally excluding certain types of students from this experience, it is just that people are not making the extra effort to invite those who are different from them to participate,”Moss said.“At the competition in Elkhart, ours was the only team with black students.At the Ft. Wayne event, there were more minority participants, but the percentage was very low.There’s something wrong with this picture, especially when FIRST Lego League is such an incredible program that can really inspire kids in science and technology.”

“The I-Robotics team has generated much excitement at the RCLC, and we hope to secure the resources to offer the program to more children next year,”said center director Jay Caponigro.“This effort proves our inner-city youth are motivated to succeed in the critical fields of science, technology, engineering and math if given proper support.”