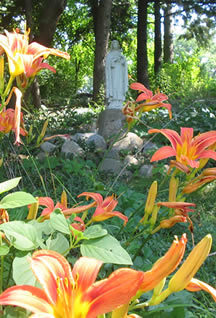 Mounted on a lump of crumbling cement, tucked in a small grove of scrub and day lilies on the south slope of a hill overlooking Notre Dames Saint Marys Lake, it is an example of that homely style of devotional art with which the Catholic Church has scandalized fastidious aesthetes for the last few centuries.

Some 50 years ago, when the old Holy Cross Seminary stood further up the slope, seminarians installed the Saint Therese statue there, perhaps because Therese was the patroness of the foreign missions to which many of them aspired, or perhaps because she wrote about and exemplified a heroic life that could paradoxically feel as quiet, uneventful, and even diminished as their own.

Not long after that ramshackle shrine was built, the old seminary was evacuated for a new facility a few hundred yards to the east and became a residence hall for Notre Dame undergraduate men.Renamed Holy Cross Hall, it was torn down in 1990.As is so often the case with a communitys treasure, Thereses statue survived almost as an afterthought.

Saints cant be said to compete with each other, but its worth noting that while not nearly as well attended as Marys sumptuous and candlelit Grotto across the lake, Thereses shrine continues to draw devoted visitors.The ground surrounding her statue is strewn with the litter of popular pietycandle stubs, shreds of paper on which petitions have been written, broken rosaries and rusty medallions.The place exudes a sort of medieval charm and must be merely idyllic for people who know or care little about the formidable woman who has given so many devotees courage to pray there.

They can be forgiven for not caring:Therese Martin was about as ordinary as a grocery bag, a product of the French middle class of the late 19 th century, a nice young lady from a nice family, who joined an unremarkable religious community, lived a quiet life in a cloister, and died while still a young nun.Dungeon, fire and sword were all missing from the monotonous life she led with a couple of dozen sisters in a cold Norman convent.The humility with which she devoted herself to prayer gave rise to her steely resolve to be anonymous, even invisible.

Nevertheless, there was about her such a conspicuous peace, such an unaffected cheerfulness, such an ingenuous welcome and such an infectious optimism that a superior required her, in obedience to her religious vows, to write down what she believed God was doing in her life.The resulting autobiography,The Story of a Soul,and a handful of letters she wrote to her friends reveal TheresesLittle Wayof drawing nearer to God by suffering tedious company, enduring the unfair reprimands of superiors, dining on meager institutional food, patiently negotiating the dull routine and unpleasant rigors of vowed life.The story is daunting to read, because it shows how universally available, and perilous, an intimate relationship with God can be.

A visit to this pretty lakeside shrine, like a consideration of her pretty nickname, the Little Flower, invites reflection on her often bleak voice.Hers was no unearned belief:When my heart, weary of the enveloping darkness, tries to find some rest and strength in the thought of an everlasting life to come, my anguish only increases,she once wrote.It seems to me that the darkness itself, borrowing the voice of the unbeliever, cries mockingly:You dream of a land of light, you believe the Creator of this wonder will be yours forever, you think you will escape one day from the mists in which you now languish.Hope on!Hope on!It will give you not what you hope for, but a night darker stillthe night of utter nothingness.

The Little Flower knows more about our inner dread than these quaint surroundings might at first suggest.Its good to know that in a spiritually vacuous age and culture, there is a place on the Notre Dame campus where people consult her from time to time.