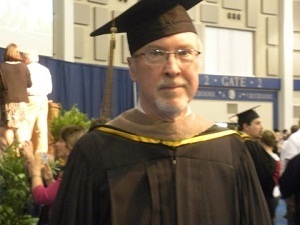 A firm believer in the adage “better late than never,” Gene Dixon turned heads at the University of Notre Dame’s Commencement this spring.

With his distinguished grey beard and academic-looking eyeglasses, Dixon wasn’t among the faculty and dignitaries on the podium. Nor was he among the thousands of proud relatives in the audience. Dixon, in full cap and gown, was in the processional.

Dixon earned his master’s of business administration from Notre Dame in 1969. However, while his classmates all donned their graduation gowns and eagerly accepted their MBAs on June 1 of that year, Dixon, an Army reservist, was already in Fort Knox, Ky. His reporting officer told him to get there immediately after completing his final class—there was to be no graduation ceremony for him.

Dixon pleaded his case, asking for one more day in South Bend to take part in Commencement. His reporting officer sternly reminded him that he was allowed an education through the Army Reserve program—and that included classes, not graduation.

Dixon went on to complete his military service before enjoying a successful business career. Early on he worked in the packaging film department of DuPont in Wilmington, Del. Today he is director of credit for Thyssen Krupp Materials in the metro Detroit area.

Some 41 years after the fact, Dixon still reflects fondly on his time at Notre Dame. He enjoyed the MBA program immensely—both the course work and the faculty. He often jokes about how he and his classmates served as “guinea pigs” for the fledgling MBA program; however, important modifications were made to the program, thanks to the input of its inaugural class.

Despite his fond memories, Dixon’s regret about missing his Notre Dame graduation lingered. Even as he and his daughter, Emily, a 1998 Notre Dame graduate, participated in the University’s Habitat for Humanity housing projects in South Bend and Mississippi, and even as he actively sought and won officer positions in the Notre Dame Club of Detroit (he is the club’s president-elect for 2010-11), Dixon always had that nagging “what if” lodged in the back of his mind. So this year, 41 years after the first Notre Dame MBAs graduated, Dixon decided to rewrite history a bit.

On May 21, 2010, Dixon, in full graduation dress, got in line behind the last 2010 MBA degree recipient, a young man with the last name of Zink. On his way to the stage, Dixon heard one attendee commenting that he “looked a little old to be graduating,” but he paid no mind. Once on stage and just prior to receiving his diploma, Dixon’s story was told to the audience. At once, the entire crowd stood to give him an ovation, a reaction that—though it was 41 years coming—made Dixon’s Notre Dame Commencement well worth the wait.