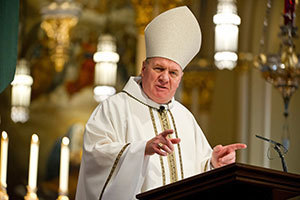 Archbishop Joseph W. Tobin of Indianapolis, one of the three Americans named as cardinals by Pope Francis on Sunday (Oct. 9), will speak on “Welcoming the Stranger while Challenging the Fear” at 12:30 p.m. Friday (Oct. 14) in the University of Notre Dame’s Hesburgh Center auditorium.

Archbishop Tobin was named cardinal along with Chicago archbishop Blaise Cupich and Bishop Kevin Farrell of Dallas. His elevation is widely regarded as reflective of Pope Francis’ concern for the plight of refugees worldwide. Last December, Archbishop Tobin was outspoken against Indiana Gov. Michael Pence, now the running mate of Republican presidential candidate Donald Trump, when Pence opposed the settling of Syrian refugees in the state. Pence later said he would not enforce his call to ban Syrian refugees one day after Archbishop Tobin announced a Syrian family had arrived in the Indianapolis archdiocese.

In his Notre Dame lecture, Archbishop Tobin will explore the imperative to assist refugees as a component of the moral tradition of the Catholic Church. He also will address the fear and anxiety often arising from the imperative of hospitality and suggest ways the Catholic community might address them. Archbishop Tobin will be joined by Ebrahim Moosa, professor of Islamic Studies in Notre Dame’s Keough School of Global Affairs. A question and answer session will follow the presentation.

The event is co-sponsored by Notre Dame’s Center for Civil and Human Rights and Center for Social Concerns.

A live stream of the Friday afternoon speech is available here: http://humanrights.nd.edu/tobin.