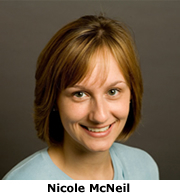 Most of us share it and it seems a safe enough assumption: mathematical skills and performance develop and advance as students progress through their elementary school years.

However, a new study by University of Notre Dame psychologist Nicole M. McNeil suggests that for at least one type of math problem, 7-year-old students are outperforming 9-year-olds.

McNeil analyzed how 7- to 11-year-old children performed onequivalenceproblems. An example of an equivalence problem is:3+4+5= 3+_.Previous studies have shown that children have substantial difficulties with mathematical equivalence problems. For example, many come up with solutions for the right side of the equation that range from3+12to3+15.(For the numerically challenged, the answer is 9.) __

Mathematical equivalence is a fundamental concept in algebra and success in algebra is crucial to future educational and employment opportunities,McNeil said.

No previous study has specifically examined how equivalence performance develops over the course of elementary school years. However, theories that have focused more generally on the development of studentsquantitative skills assume that childrens difficulties with mathematics are due to something the children lack , such as advanced logical structures, a mature working memory system or proficiency with basic arithmetic facts.

By contrast, McNeils study suggests that childrens difficulties are due, at least in part, to something that they have existing knowledge. And this existing knowledge promoteschange-resistancebehaviors in students.

Although these patterns likely help performance on traditional arithmetic problems (3+4=_), they do not help, and most likely hinder, performance with equivalence problems, which do not adhere to the traditional form.

To solve an equivalence problem correctly, children must notice that the equal sign is not at the end of the problem, understand that the equal sign denotes an equivalence relation between the two sides of the equation, and manipulate the numbers and operations to arrive at an answer that makes both sides of an equation have the same value,McNeil said.To satisfy these conditions, children must either ignore or override their long-term memory of the operational patterns.

McNeil conducted two separate studies of 7- to 11-year-olds inPittsburghandRaleigh,N.C.,schools, respectively, that confirmed that performance on equivalence problems declined between age 7 and 9 before improving between the ages of 9 and 11.

These findings challenge our intuition and several prevailing theories, but they support change-resistance accounts,McNeil said.

McNeil points out that similar results have been found for Canadian children, but interestingly enough, not for those inChina.

In theUnited States, childrens early mathematics experience is heavily weighted toward arithmetic operations such as addition, subtraction, multiplication and division,McNeil said.Children learn arithmetic in a very procedural fashion for many years before they learn to reason about equations as expressions of mathematical equivalence.

McNeils research paper appears in the May edition of the American Psychological Association journal Developmental Psychology.