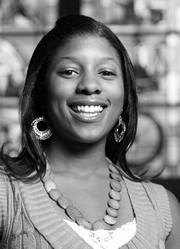 Rhea Boydtaught us why we need an Africana Studies major,says Richard Pierce, associate professor of history and director of the almost year-old Africana studies department at Notre Dame.

The senior fromAkron,Ohio, knew she would be interested in medicine and science.But I knew I was also really interested in learning more about my historical background and my culture as an African-American,says Boyd.

Because no existing program offered the combination of science and African-American studies that she wanted, faculty advisors suggested she look into designing her own major. —

A self-designed major in Africana studies and health, making Boyd the first Notre Dame student to pursue a first major centered in whole or in part on the African-American experience. She also is graduating with a major in the Preprofessional Studies Program. —

To design a major, Boyd presented a proposal to the Arts and Letters Undergraduate Studies Advisory Committee that outlined her unique interests and a semester-by-semester description of the courses she would take.

To create the plan, she turned to Jennifer Nemecek, who directs the Preprofessional Studies Program; Heidi Ardizzone, assistant professor of American studies; Hugh Page, then director of the African and African American Studies Program (AFAM); and Pierce. She also described how her special curriculum supported her career goals.

Designing the major, however, didnt just shape what she learned in the classroom.

It helped me focus where I want to go. . . . Im interested in going to medical school and becoming a physician but also working in the public health side of medicine to ultimately affect policy,said Boyd, who most likely will attend Vanderbilt.

As the first student to graduate with Africana studies as part of a first major, Boyd will be remembered as the torchbearer for students to come, says Pierce. In July 2005, Notre Dame elevated AFAM to department status, creating the Department of Africana Studies. The department focuses its scholarship on the African-American experience,Africaand the African Diasporathe global dispersion of people of African descent.

Already offering a supplementary major, interdisciplinary minor and African area studies minorall programs that previously were part of the AFAM curriculumthe department is building faculty and course options in anticipation of enrolling its first full major.

In the coming years, Boyd hopes the departments faculty and its impact on campus will grow, and that more and more students, African-Americans and non-African-Americans alike, will enroll in Africana studies programs.

For her part, she credits the department and its members for being so willing to let her design her own course of study.

Theyve been so great,she said.It would have been harder if the department wouldve been more opposed to it; they were so welcoming and excited about me [doing this].

Like the existing supplementary major and the new first major, Boyds self-designed major required that she complete a senior capstone project. She worked with Daniel Lende, assistant professor of anthropology, and Debra Stanley, director of Imani Unidad, a local AIDS ministry, to conduct a needs assessment ofSouth Bends African-American community in terms of both HIV/AIDS awareness and substance dependence and abuse.

The focus of this project is to enable the community to help itself,says Boyd, who volunteered at free clinics inSouth BendandWrightsville,Ga., as an undergraduate. Her campus involvement included serving as president of Shades of Ebony, Notre Dames black womens association, and as chair of the student governments minority affairs committee.

In terms of her career, Boyds ultimate goal is to work at the state and federal levels of government, which she thinks is the best way to implement changes that benefit large numbers of people. She views projects like the one shes been working on as critical preparation for what she hopes to achieve.

I think this just keeps me on my toes about what are the real issues,she said.Sometimes when you get to high jobs in the government or anything like that, you forget about what people are really doing and its just about the numbers. If I can be grounded in these experiences with people, it will really help me be more informed.