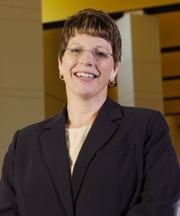 Anna Thompsons journey to Notre Dame started, quite literally, with a bang or, actually, two.

While driving to South Bend from Minnesota on separate trips this summer, she experienced a pair of blown tires – the first while coming out to look for a new home, and the second while coming back for good in July. That one was particularly scary – a semi up ahead lost its load, which is usually bad enough, but this truck happened to be carrying, of all things, saw blades. Yes, saw blades, which came raining down on the interstate, leaving Thompson and other travelers in the midst of a sheet metal downpour.

Maybe we shouldnt be going to Notre Dame,she recalls thinking at that point.But we survived it all and it could have been much worse. Its amazing no one was injured. There must have been a little divine intervention.

Not too surprising, considering her destination. And it only seems appropriate that she should arrive in dramatic fashion, given shes the person tapped to direct Notre Dames flourishing enterprise in the performing arts.

Fresh off a nine-year stint as executive director for fine arts programming at the College of Saint Benedict and St. Johns University in Saint Joseph and Collegeville, Minn., Thompson has settled in nicely since landing on campus.

Wonderful hospitality, amazing campus and staff, and a beautiful facility, so Im really enjoying it,she says of her first two months on the job as the Judd and Mary Lou Leighton Director of Performing Arts.

I was in love with the space before I ever walked in the door,she says, referring to the 151,000-square-foot facility she now leads.The acoustics in the Leighton Concert Hall are amazing and the Decio Theatre has the most beautiful sightlines. You have the intimacy of a small theater with the stage house space of a large broadway house.

She also is quite smitten with the buildings three other performance spaces – the Philbin Studio Theatre, Reyes Organ and Choral Hall, and the THX-certified Browning Cinema, which she callsthe best cheap date in town,since you can get a two-dollar popcorn and pop and see a great art film.

Coming back to South Bend islike coming hometo Thompson, who raised her family in Indianapolis for 16 years and grew up in a small town near Kalamazoo, Mich., where she began her career as a band teacher for fifth- through twelfth-graders. Other career stops have taken her to the Indianapolis Museum of Art and Butler University, where she created the entire education program, curated and administered all arts education programs, and established the universitys first distance learning program for national touring Broadway productions.

Next season is our fifth season and by the time we finish next year, Id like to have five new commissioned works with Notre Dames name on them that will be touring. And Id like to see that continue for the next five years,she says, adding,Id like us to be known for supporting artists and for the creation of new works of art, whether it be theater or music or dance, as well as for our collaborations across campus, within the classroom. Not just the arts classroom, which is a logical connection, but history, theology, law, even biology.

Biology and the performing arts? Absolutely, if you ask Thompson, who believes the skys the limit when it comes to interesting opportunities for new partnerships.As long as they sky isnt filled with, say, saw blades.

Oh, it wouldnt be any fun if you didnt have a few surprises thrown in,she says with a smile.