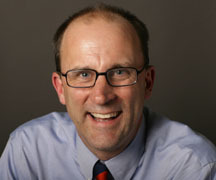 On a college campus, spring cannot pass into summer without graduation and the flood of memories it triggers. At Notre Dame, its not all that uncommon for these stories to involve a student who had, say, a somewhat singular focus on where he or she wanted to go to school.

Take Sioux Falls, S.D., native John McGreevy, for instance. His parents encouraged their children to attend a Catholic college or university, but he says his dad, a Notre Dame alum, didnt pressure him about which one he should choose.

No, he admits he needed little convincing to becomethe kind of kid who scares the Admissions Officewith his unflinching loyalty to the University.

I have a vivid memory of coming home. The [acceptance] letter had come, but my dad had already opened it, which was characteristic, and he had put it on the door,McGreevy says.And when I walked in, I remember how excited I was to be admitted. Really, this is the only place I considered going.

But despite his ability to recount this story with the clarity of a recent graduate, he isnt a member of the Class of 2008, although the history majors do know him pretty well.

In April, McGreevya 1986 Notre Dame graduate who is a professor of history at the Universitywas named I.A. OShaughnessy Dean of the College of Arts and Letters, effective July 1. He succeeds Mark Roche, who has been dean for the last 11 years.

I dont think being an undergraduate here means Ill either be a successful or unsuccessful dean really, but theres something unusual in that a significant part of my life history is now attached to this place,McGreevy says.

That history has made for an interesting bit of Arts and Letters trivia. While five other undergraduate alumni of Notre Dame have gone on to serve as dean of the College, McGreevy is the first in 40 years to do so and the only one in that group not to be a priest of the Congregation of Holy Cross, the Universitys founding religious community.

It seems wholly appropriate, then, to dub this former resident of Alumni Hall aDouble Domer,a title usually reserved for someone who has earned two degrees from Notre Dame (he received his Ph.D. from Stanford University).

I have said to other people its not as if I was out there trying to become a dean somewhere else,says McGreevy, who is the author of two books, includingCatholicism and American Freedom: A History,which The New York Times calledbrilliant.I think this is a really important place and an important experiment in American higher education,he adds.

He often describes the University this way because he believes it has ventured into uncharted territory.

The overarching goal is to make Notre Dame a truly top universityone thats mentioned in the same breath as Stanford and Brown and the University of Chicagoand also seriously religious,he says.Thats an exciting, unusual project. I think dean of Arts and Letters is as important as any other job in trying to make that happen.

Before returning to Notre Dame in 1997, McGreevy was Dunwalke Associate Professor of American History and History and Literature at Harvard University. Since 2002, he has been chairperson of the Department of History, a position he will hold until the official start of his tenure as dean.

He points to a strong desire to see Notre Dame succeed as one of the reasons why he came to the University as a faculty member. But his personal history notwithstanding, he doesnt look at his alma mater through rose-colored glasses.

I will say Im not a Notre Dame nostalgist,McGreevy says.I think the education I received was better than the one my father received, even though his was a good education, and I think the education our students now are getting is even better. If theres something that charges me up, its to see both our undergraduate and graduate students really flourishing.

Incidentally, the details of how he found his way to the University a second time make for a good story, too, even if its one that lacks the drama of finding an acceptance letter taped to the front door.

When he graduated from Notre Dame, McGreevy wanted to teach but wasnt sure at what level, high school or college. Once he received his Ph.D., he knew that to a large extent, where he worked would be out of his control, as openings in the academic job market are limited and unpredictable.

And so in that sense,he says,theres luck and maybe destiny, I dont know, but a lot of my life now has been tied up with Notre Dame, and thats okay. I think if youre going to tie yourself to an institution, this is a good one to be tied to. I think its a great place.