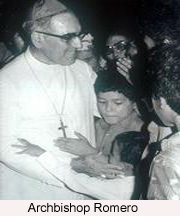 “Monsignor Romero: A Bishop for the Third Millennium,” edited by Rev. Robert S. Pelton, C.S.C., director of Latin American/North American Church Concerns and fellow in the University of Notre Dames Helen Kellogg Institute for International Studies, has recently been published by Notre Dame Press.p. The book is a collection of lectures given at Notre Dame by priests, human rights advocates, civic leaders, and Latin American scholars in honor of the late Archbishop Oscar Romero of San Salvador, who was assassinated by a right-wing death squad while presiding at Mass on March 24, 1980. His outspoken advocacy of human rights, his denunciations of U.S. military aid to El Salvador, and his insistence that the Church be inseparable from the poor all made him a figure of some controversy before and after his death. Archbishop Romero has been officially recommended for canonization by the Catholic Church in El Salvador, and he is already widely venerated as a martyr throughout Latin America and in this country.p. Earlier this month, a federal court judge in Fresno, Calif., ruled that former Salvadoran Air Force Capt. Alvaro Rafael Saravia was legally responsible for Archbishop Romeros assassination and ordered him to pay $10 million in damages.p. The lectures in the book argue that Archbishop Romero is an exemplary church leader for the new millennium and emphasize his commitment to human rights, his innovative implementation of the “option for the poor,” his dedication to the Church, and his views on the responsibilities of laypeople.p. “Monsignor Romero” includes an introduction by Father Pelton and an afterword by Juan Méndez, former director of the Notre Dame Center for Civil and Human Rights.p. “Father Pelton has done a remarkable job in gathering such a diverse and high-quality set of lectures,” said one reviewer, Rev. Luis Calero, S.J., of Santa Clara University, adding that “this volume will become invaluable in keeping Bishop Romero’s memory and legacy alive in the U.S. and abroad.”p. A frequent visitor to Latin America, Father Pelton is the author of numerous articles and books about the Catholic Church there, including “Small Christian Communities” and “From Power to Communion: Toward a New Way of Being Church Based on the Latin American Experience,” both also published by the University of Notre Dame Press.p. _Contact: Rev. Robert S. Pelton, C.S.C., at 574-631-8528 or Pelton.1@nd.edu _ p.