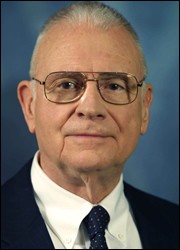 Lee Hamilton, vice chair of the 9-11 commission, will lay out a blueprint for effective counter-terrorism strategy and U.S. foreign policy in lectures March 22 and 23 (Tuesday and Wednesday) at the University of Notre Dame.

The March 22 lecture,Fighting Terrorism,will begin at 4:15 p.m. in the Decio Mainstage Theatre of theDeBartoloCenterfor the Performing Arts.The second lecture,How to Use American Power,will begin at 12:30 p.m. in the auditorium of theHesburghCenterfor International Studies.

Sponsored by the Kroc Institute for International Peace Studies, the talks comprise the 11 th annual Theodore M. Hesburgh, C.S.C., Lectures in Ethics and Public Policy and are free and open to the public.The lectures will be Webcast live at mms://streaming.nd.edu/hamilton .

Hamiltonwas vice chair of the National Commission on Terrorist Attacks upon theUnited States, which issued the influential and best-selling9-11 Reporton the attacks of Sept. 11, 2001.

Since 1999,Hamiltonhas been president and director of theWoodrowWilsonInternationalCenterfor Scholars.Previously, he representedIndianas 9 th District in the U.S. Congress for 34 years.Hamiltonserved as chairman and ranking member of the House Committee on Foreign Affairs.He also chaired the Subcommittee on Europe and the Middle East, the Permanent Select Committee on Intelligence, and the Select Committee to Investigate Covert Arms Transactions withIran.