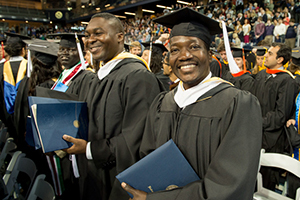 Having served as president of Bryn Mawr College, dean of arts and sciences at Georgetown University and professor and chair at the University of Toronto, among many other positions, Jane McAuliffe has a deep familiarity with the world of higher education. With that familiarity comes an understanding of the turbulent nature of the contemporary higher education environment.

Yet despite that turbulence, McAuliffe expressed her firm belief that degree recipients at the University of Notre Dame’s Graduate School Commencement ceremonies Saturday (May 16) are entering into the most exciting period of higher education.

McAuliffe, a scholar of the Quran and early Islamic history and director of the John W. Kluge Center at the Library of Congress, delivered the commencement address during the ceremonies. The University recognized and celebrated the recipients of 245 doctoral degrees and 437 master’s degrees.

“Across the country we have politicians cutting budgets and questioning the value of basic research,” McAuliffe said. “At institutions both big and small, we struggle to support our students and to fund our faculty. And there is no end to university bashing. Each spring produces a new batch of books about the crisis in higher education. A few years ago it was ‘Excellence Without a Soul: Does Liberal Education Have a Future?’ and ‘Academically Adrift: Limited Learning on College Campuses.’ This year’s titles include ‘College Disputed: The Great Unbundling of Higher Education’ and ‘Excellent Sheep: The Miseducation of the American Elite’. Such publications are perfectly timed to arrive on the market just as high school seniors are stressing about admissions and their parents are trying to decide if they must refinance the house to meet tuition payments.”

Despite the woes of higher education, McAuliffe focused on two glimmers of hope for the field that will be transformative.

The first is what she termed the learner at the center.

“Rather than fitting students to our current schedules and structures, university learning will become more distributed and more individually directed,” McAuliffe said. “Highly motivated students are already racing through the noncredit, online courses offered by the likes of edX and Coursera, courses like those that Notre Dame launched this spring. They are placing into upper-division work and, in the spirit of a liberal arts education, they are sampling subjects without fear of grade-point consequences. The flip side of this is talent identification. Stories of the Pakistani girl coming in tops with an online physics course or the boy from Mongolia who aced one on computer circuits have inspired admissions officers across this continent and set off a talent hunt.

“In another development, data analytics is reshaping academic advising. Some universities are getting smarter about tracking student progress and catching students before, as one of my associate deans at Georgetown used to say, ‘they wash up on shore at the end of the semester like dead fish.’

The second big trend McAuliffe identified is the emergence of globe-spanning institutions and networks.

“Examples of this are proliferating,” she said. “Earlier this month I visited the campus in Qatar shared by a consortium of universities including Cornell, Georgetown and Northwestern. You doubtless know that NYU has built operations in Abu Dhabi and Shanghai, while Yale has opened a college in Singapore. Not all universities will build new campuses, but many are rapidly expanding student and faculty exchanges, developing co-taught, transnational courses, and creating dual degree programs. As a university with a long-standing international focus and footprint, Notre Dame has now taken the extraordinary step of creating a new School of Global Affairs.”

Despite many experiments in online education and competency-based education that were over-hyped and failed, and the upsides and downsides of university internationalization, McAuliffe still firmly believes we are on the cusp of the most exciting period of higher education. Her confidence is based on one concept: “learning.”

“But the promise of learner-centered pedagogy and of global networks of learning will only succeed if they reinforce rather than undermine the core functions of our best educational institutions: the nurture and formation of human persons, the unfettered search for knowledge on every possible front and the persistent pursuit of public benefit and social good,” she said. “These core functions constitute the measuring stick with which we can assess all the disruptive technologies and all the transnational initiatives that we face today and that we will face tomorrow.

“As graduates of Notre Dame, you are particularly well-equipped to wield/utilize that measuring stick. You have been part of an academic community that takes student formation seriously, that even speaks of it in vocational terms. You have undertaken research in an institution that values the search for truth, that can look to a legacy of philosophical and theological reflection that finds beauty in that search far beyond its utilitarian benefits. And you have chosen to conduct your scholarly endeavors in a Catholic university that cares, one whose commitment to social justice and human betterment infuses all that it does.”

Christopher Roberts, dean of the Samuel Ginn College of Engineering, Auburn University, was recognized as this year’s Distinguished Alumnus Award winner. He earned his doctorate in chemical engineering from Notre Dame in 1994. A noted researcher whose focus is nanotechnology and synthetic fuels, Roberts was advised by professor Joan Brennecke while at Notre Dame. As dean at Auburn, Roberts has led the college to record graduate and undergraduate enrollments and has spearheaded expansion of the college’s research programs — many of which address the vital issue of economic development in the state, region and nation.

For his efforts on behalf of scores of graduate students, particularly his role in establishing a unique doctoral program joining the study of math and philosophy, Michael Detlefsen, the McMahon-Hank Professor of Philosophy, was honored as the 2015 recipient of the University’s James A. Burns, C.S.C., Graduate School Award. This award is given annually to a faculty member for distinction in teaching and honors the first Notre Dame president with an advanced degree.

Steven Corcelli, associate professor of chemistry and biochemistry, was recognized as the winner of this year’s Director of Graduate Studies Award. He was honored for his initiatives in increasing the number of external, full-stipend fellowships, such as the National Science Foundation Graduate Research Fellowships, won by chemistry and biochemistry graduate students, and for increasing student diversity within the department.