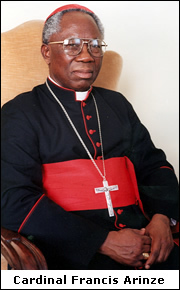 Degrees will be conferred on some 1,850 undergraduates and 550 advanced degree candidates in ceremonies beginning at2 p.m.(EST) in theJoyceCenteron campus.

Gregorian, president of the Carnegie Corporation, will receive an honorary doctor of laws degree. The other honorees, listed alphabetically, are:

Hank Aaron (doctor of laws) – Major League Baseballs career home run leader with 755, Aaron spent 23 years with the Milwaukee and Atlanta Braves and the Milwaukee Brewers. In addition to his legendary home run record,HammerinHankestablished 12 other big league career records, including most games, at-bats, total bases and RBIs. He earned three Gold Gloves as an outstanding defensive outfielder, appeared in 24 All-Star Games (there once were two All-Star Games each season), and was the Most Valuable Player of the 1957 All-Star Game. He was elected to the Hall of Fame on the first ballot in 1982 and now serves as an executive with the Braves.

Cardinal Francis Arinze (doctor of laws) – Considered a leading papal candidate prior to the election this week of Pope Benedict XVI, Cardinal Arinze has served since 2002 as the prefect of the Congregation for Divine Worship and the Discipline of the Sacraments, the Vatican office in charge of liturgy. He was born in 1932 in Eziowelle, a village in southeastNigeria, to parents who worshipped traditional Ibo deities but who sent him to an Irish missionary school. At age 9 he was baptized into the Catholic Church. He was educated at Bigard Seminary inNigeria,UrbanUniversityinRomeandLondonUniversity, and was ordained in 1958. He was appointed the worlds youngest bishop, at age 32, in 1965, serving the Archdiocese of Onitsha, Nigeria, though he spent several years in Biafra as a fugitive during the civil war in his homeland. Pope John Paul II called him toRometo serve in the Curia as prefect of the Pontifical Council for Interreligious Dialogue in 1984, and he was elevated to cardinal a year later.

Dr. Benjamin Carson (doctor of science) – One of the worlds leading brain surgeons, Carson is the director of the Division of Pediatric Neurosurgery at Johns Hopkins University and a professor of neurosurgery, plastic surgery, oncology and pediatrics. Among his most notable achievements was the separation in 1987 of Siamese twins joined at the back of the head, the first successful completion of such a procedure. A poor student in elementary school, he was pushed by his mother to use education as a means to escape poverty. Now, as a popular motivational speaker and the author of three books, he encourages others to set goals and achieve them.

Judge Robert Carter (doctor of laws) – A U.S. District Court judge for the Southern District of New York, Carter is one of the leading figures in the American civil rights movement. A graduate of the Howard andColumbiaUniversitylaw schools, he encountered pervasive racial prejudice while serving for three years in the U.S. Army. The experience led him to accept a position in 1944 with the NAACP, where he served for the next 24 years, first as an assistant to Thurgood Marshall and later as the organizations assistant special counsel and general counsel. He was victorious in 21 of 22 cases argued before the Supreme Court – including Brown vs. Board of Education. He spent three years in private practice before his appointment to the bench in 1972.

Robert Conway (doctor of laws) – A senior director of Goldman Sachs, Conway has been a member of the firm since 1970 and has served as managing director of Goldman Sachs International Corporation in London and as co-chairman in New York. He earned his bachelors degree from Notre Dame in 1966 and has served on the Universitys Board of Trustees since 1990. He previously served for five years on the Advisory Council for theCollegeofArtsand Letters and also serves on the Ireland Advisory Council and the Advisory Council for the Performing Arts. He endowed a library collection in Medieval studies in the name of his mother, Margaret Conway, and the directorship of Notre Dames Medieval Institute. He earned his master of business administration degree from theUniversityofChicagoand a license from theUniversityofLouvaininBelgium, and has taught finance at the Columbia University Graduate School of Business Administration.

Jack Greenberg (doctor of laws) – Like Judge Carter (above), Greenberg served with the NAACP, first as assistant counsel and then director-counsel of the organizations Legal Defense and Educational Fund from 1949 to 1984. He argued 40 cases before the Supreme Court – including Brown vs. Board of Education. A member of theColumbiaUniversityLawSchoolfaculty since 1984, he teaches constitutional, civil and human rights law, as well as civil procedure. He has participated through the years in human rights missions to the Soviet Union,Poland,South Africa, thePhilippines,Korea,Nepaland elsewhere. His publications includeRace Relations and American Law,Litigation for Social ChangeandCrusaders in the Courts: How a Dedicated Band of Lawyers Fought for the Civil Rights Revolution.

Joseph Keller (doctor of science) – An acclaimed mathematician, Keller taught and conducted research atNew YorkUniversityandStanfordUniversity, where he is a professor emeritus. His research concerns the use of mathematics to solve problems of science and engineering. His Geometrical Theory of Diffraction is widely used, for example, to analyze radar reflection from objects and to study acoustic wave propagation in the ocean. He also formulated the EBK method of quantization to determine energy levels of atoms and molecules in quantum mechanics and solve characteristic value problems in other fields. He is a member of the National Academy of Sciences and has received numerous prestigious awards for his contributions to the field.

Sonia Manzano (doctor of laws) – Best known for her 30-plus years playing the character Maria onSesame Street,Manzano also is a writer for the show and has shared in 14 Emmy Awards as a part of the writing staff. She also has written for the childrens series

Little Billand produces an online parenting column titledTalking Outloudfor the Sesame Workshop. A first-generation American of Latino descent, she grew up in the South Bronx and earned a scholarship toCarnegieMellonUniversity. In her junior year she earned a starring role in the original production of the off-Broadway showGodspell,and a year later was cast as Maria. She is a recipient of the Hispanic Heritage Award for education and was honored by the Congressional Hispanic Caucus.

James Morris (doctor of laws) – Executive director of the United Nations World Food Program since April 2002, Morris oversees the worlds largest food aid organization, which last year fed some 104 million people in 81 countries. He began his career in city government inIndianapolis, primarily as chief of staff for then-Mayor Richard Lugar. He became director of community development for Lilly Endowment Inc. in 1973 and later served as vice president, executive vice president and president of what is one of the worlds largest charitable foundations. He was chairman and chief executive officer of IWC Resources Corp. and Indianapolis Water Company prior to his current position. He earned his bachelors degree in political science fromIndianaUniversityand his master of business administration degree fromButlerUniversity.

Anne Mulcahy (doctor of laws) – A 29-year veteran of Xerox, she was appointed chief executive officer of the company in 2001 and chairman of the board in 2002. Through a massive transformation, she has developed Xerox into an innovative technology and services enterprise with close to $16 billion in annual revenues. She also has been at the forefront in ensuring that the companys business decisions and actions are guided by a clear set of corporate values. She began her Xerox career as a field sales representative and assumed increasingly responsible sales and senior management positions through the years. In addition to the Xerox board, she is a member of the boards of directors of Target Corp., Citigroup and Catalyst, a non-profit organization supporting women in business.

Steven Sample (doctor of engineering) – An electrical engineer, Sample has served since 1991 as president of the University of Southern California after serving for the previous nine years as president of the State University of New York at Buffalo. His patents in the field of digital appliance controls have been licensed to nearly every major manufacturer of appliance controls and microwave ovens, and more than 300 million home appliances have been built using his inventions. He co-teaches a course for juniors and seniors titledThe Arts and Adventure of Leadership,and his book,The Contrarians Guide to Leadership,has been a Los Angeles Times best-seller. During his presidency, USC has been recognized as a national leader in innovative community partnerships and conducted the most successful fund-raising campaign in the history of higher education. He earned his bachelors, masters and doctoral degrees from theUniversityofIllinois.

Dr. Carol Lally Shields (doctor of science) – A 1979 graduate of Notre Dame, Shields is associate director of oncology service atWillsEyeHospitaland professor of ophthalmology atThomasJeffersonUniversityinPhiladelphia. She earned her medical degree from theUniversityofPittsburghand completed her residency in ophthalmology at Wills. She is the author or co-author of five textbooks, some 700 articles in major journals, and more than 140 textbook chapters. She is the first woman to receive the Donders Medal, given by the Netherlands Ophthalmologic Society every five years to an ophthalmologist of world fame and outstanding merit. At Notre Dame, she was three-time captain of the basketball team and the first woman to win the Byron Kanaley Award for excellence in academics and leadership, the highest honor given to Irish student-athletes.

Dr. Joseph Walther (doctor of science) – Founder of the Walther Cancer Institute of Indianapolis, Walther stepped down as president and chief executive officer of the non-profit medical research organization in 2002. The institute invests in research at severalMidwestuniversities, including Notre Dame, in an effort to unlock the basic mechanisms that govern the formation of cancer. A native ofIndianapolis, Walther earned his medical degree from the Indiana University School of Medicine and was a decorated U.S. Army Air Force surgeon during World War II. He founded the Winona Memorial Clinic as his private practice in 1947 and built theWinonaMemorialHospitalin 1966. With proceeds from the sale of the hospital in 1985, he founded the Walther Cancer Institute with the mission to eliminate cancer as a cause of suffering and death.