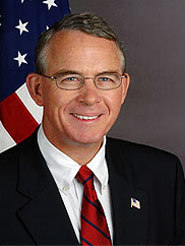 The University of Notre Dame has received a $10 million gift from the Francis and Kathleen Rooney Foundation to support a new Center for the Study of American Democracy.

Members of the Notre Dame School of Architecture Advisory Council since 2001, Francis and Kathleen Rooney also endowed the deans chair of the architecture school.

From 2005 until earlier this year, Francis served as the U.S. Ambassador to the Holy See, appointed by President Bush.

The Rooney Center for the Study of American Democracy will seek to further the understanding of democratic politics and policy making in the U.S. by promoting and facilitating research, teaching and other activities that explore and assess the quality of American democracy.

We are so very grateful to the Rooney family,said Rev. John I. Jenkins, C.S.C., Notre Dames president.This extraordinary gift will significantly expand, improve and enhance studentsopportunities to prepare for distinguished careers in public service and for lives of citizenship, regardless of career choice.

The Rooney Center will focus on leadership, citizenship and public service; the politics of democratic inclusion; constitutional studies; and the role of religion in a democratic society.

By attracting the best scholars of American politics, funding visits from national and international academic and political experts through speaker series and conferences, and supporting outstanding graduate students, this endowment will help make Notre Dame a leading center for debate and discussion of central issues and concerns in American politics,said Christina Wolbrecht, associate professor of political science and director of the current Program in American Democracy.Faculty lines and research funds will enable faculty to achieve the highest standards in research and teaching, improving our understanding of the ways in which American democracy functions in the 21st century.

Prior to his appointment to the Holy See, Ambassador Rooney was the chief executive officer of Rooney Holdings Inc., an investment and holding company based in Naples, Fla.He also served as the chairman of Manhattan Construction Company, whose projects include construction of the George H.W. Bush Presidential Library in College Station, Texas; the visitor center at the U.S. Capitol; the Ballpark at Arlington in Arlington, Texas; the Reliant Stadium in Houston; and the Santa Fe Opera Theater in New Mexico.

Kathleen Rooney has served on numerous museum and charity boards, including the Philbrook and Gilcrease Museums in Tulsa, Okla., and currently she is tutoring English to Speakers of Other Languages as part of the Collier County Literacy Program.

The Rooneys have been active in Catholic, political and civic circles at the state and national levels.Other affiliations with Catholic organizations include the St. Francis Health System in Tulsa; Cascia Hall Preparatory School, an Augustinian middle and high school in Tulsa; and the Sovereign Military Order of Malta.They also both are trustees of the Naples Children and Education Foundation, which serves the at-risk and disadvantaged children of Collier County.

The Rooneys have three children: Larry, who with his wife, Porscha, was graduated from Notre Dame in 2004; Michael, who was graduated in 2006 and currently attends Notre Dame Law School; and Kathleen, who is a junior at Notre Dame.

The Francis and Kathleen Rooney Foundation is a non-profit organization that supports a wide range of charitable causes.