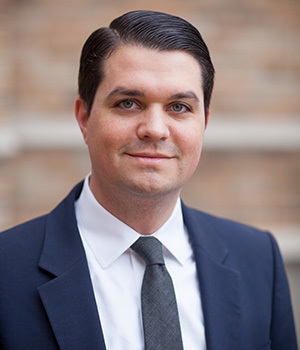 Wright’s bold blend of contemporary jazz and traditional liturgical music developed through his research on the work of 17th-century composer Giovanni Anerio, who – 400 years ago at the very same church – similarly surprised and delighted crowds with secular riffs on sacred song.

“Anerio lived and worked just after the Council of Trent, so the Catholic Church was prioritizing transparency and understanding in the life of faith,” Wright said. “It’s not unlike our own time where a post-Vatican II Church is asking how we can make the experience of worship and liturgy present to people in their everyday lives.”

The music of “Drama and Devotion” is organized around five biblical scenes, which are inspired by Easter Vigil Mass readings: Abraham and Isaac, the parable of the Prodigal Son, the crucifixion, the resurrection and St. Paul’s conversion on the road to Damascus.

The Notre Dame Children’s Choir brought this dialogue between past and present to life for Wright during the launch of “O, Emmanuel,” his bestselling 2016 Advent and Christmas album that debuted at No. 1 on Billboard’s Traditional Classical Albums chart.

“After rehearsing for so long, the kids had the memorized sacred portion down cold, but when we added the three-piece jazz improvisation around their singing, they just lit up,” Wright said. “It was like they understood that the music could be different every time – that in being present to the moment, they could be creative with it.” 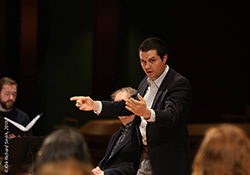 Wright’s artistic and scholarly path combining jazz and sacred music may have surprised him most of all.

“While I was raised Catholic, loved the music, and wanted to contribute something of my own to the Church, I ended up playing jazz exclusively through high school, college and in my time in the military with the Naval Academy Band,” he said.

After graduating from New School and applying to graduate programs while working as a church music director to support his family, Wright assumed he would need to let go of jazz in order to pursue sacred music.

Margot Fassler, Keough-Hesburgh Professor of Music History and Liturgy and director of the Sacred Music at Notre Dame program, relieved Wright of this notion when he arrived in her graduate class on liturgical prayer.

“Professor Fassler asked me to write a jazz vespers service for one of my first assignments, and I wrote ‘Vespers for the Feast of the Transfiguration,’ which is based on a Sufjan Stevens song,” Wright said. “Then she pointed me to Anerio’s method, which grounds innovation and history in two-way dialogue. I learned I could have and do both.”

“J.J. Wright is the kind of musician Sacred Music at Notre Dame hopes to train: highly skilled as a musician, pastoral in his outlook and entrepreneurial in his determination to serve academy, Church and community,” Fassler said.

Wright is the recipient of the Dominica and Frank Annese Fellowship in Graduate Studies from Notre Dame’s Nanovic Institute for European Studies in the Keough School of Global Affairs. “The Institute is excited to support a student so immersed in the global nature and history of the Catholic church that he is in a real position to contribute something new,” said Anthony Monta, associate director of the Nanovic Institute.

The Chiesa Nuova premiere of “Drama and Devotion” is made possible through a partnership between Notre Dame’s Rome Global Gateway and the Pontificio Instituto di Musica Sacra and will feature a combined chorus of students from both institutions, as well as the NYC-based jazz ensemble Endless Field.

The lecture and concert will serve in partial fulfillment of Wright’s doctorate of musical arts degree; both are free and open to the public.

Wright will assume the post of director of the Notre Dame Folk Choir July 1.