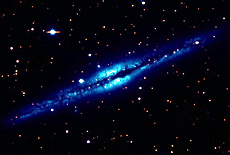 The images mark the dawn of a new era in observing the Universe as the LBT will peer deeper into space than ever before with 10 times the clarity of the Hubble Space Telescope. The telescopes unparalleled observational capability will enable astronomers to view planets in distant solar systems and detect and measure objects dating back to the beginning of time (14 billion years ago).

The $120 million LBT is located atopMountGraham, a 10,700-foot mountain in southeasternArizona. The LBT is unlike any other telescope because it uses twin 8.4-meter (27.6-foot)honeycombmirrors that sit on a single mount, allowing it to simulate a 23-meter telescope. The exceptional first light images were obtained with one of the telescopes two primary mirrors in place. The second primary mirror recently was transported from theUniversityofArizonaand installed onMountGraham. The LBT will be fully operational next year with both of its enormous eyes wide open.

The Oct. 12 target that produced the LBTs first light images was an edge-on spiral galaxy (type Sb) in the constellation of Andromeda known as NGC981. When astronomers view some galaxies, they see them more edge-on than face-on. This galaxy lies at a distance of 24 million light years. NGC981 is of particular interest to astronomers because it is emitting copious amounts of distributed X-ray emission produced by a large number of massive stars that ended their life cycles in spectacular supernova explosions.

The images were captured through a state-of-the-art camera known as the Large Binocular Camera (LBC), which is mounted high above the primary mirror at the telescopes prime focus. Its large array of CCD detectors (charge-coupled devices, or sensors used to record astronomy images) is fed by a sophisticated seven-lens optical system. Using the camera, scientists can obtain very deep images over a large field of view, which is important since the processes of star formation and faint galaxy evolution can be observed with unmatched efficiency.

The telescope was built by a consortium that includes Notre Dame, the Universities of Minnesota andVirginia, andOhioStateUniversity, all in association with the Research Corp., and researchers fromGermanyandItaly.

Notre Dames contributions to the project entitle its astrophysicists to 10 observing nights per year, a significant amount of time on the worlds largest optical telescope on a single mount.