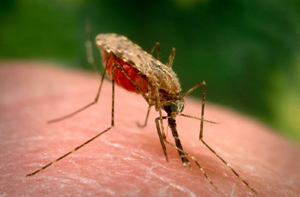 It began with an idea, Fraser says, and a grant from a Bill and Melinda Gates Foundation initiative, Grand Challenges in Global Health. These grants fund innovative research on scientific problems that—if solved—could lead to advances against multiple diseases.

“I chose dengue because I’m a virologist by training,” says Fraser, a professor of biological sciences. “I had this idea floating in my head for several years that one could target a virus infection in cells using a ribonucleic acid (RNA) enzyme known as ribozyme.”

Of those infected with dengue fever, about 1.25 million each year will die. Dengue is spread between humans by the bite of Aedes aegypti, the mosquito species also known for transmitting yellow fever.

Normally, when the cells of a mosquito become infected with the disease, the virus spreads to other cells, amplifying the virus.
“And then the virus gets transmitted to a human when the mosquito takes a blood meal,” Fraser explains. “That’s the way the mosquito acts as a vector for the virus.”

Fraser and his team of researchers have been successful in developing a ribozyme effector gene—a gene that effects the suppression of dengue virus in mosquito cells.

Fraser’s strategy arms mosquito cells with the ribozyme, so that if cells become infected with dengue, the ribozyme attacks the virus’ RNA genome, creating new messenger RNA molecules that cause the cell to die.

So far, the strategy is working.

And the potential is exciting, Fraser says. While his current research may result in the creation of mosquitoes incapable of transmitting dengue fever, he also can see the same strategy being used to combat two other human virus diseases—HIV and Hepatitis C.

The next step in the dengue fever research will involve developing and testing transgenic mosquitoes.

“Our goal is to show that these mosquitoes cannot transmit the disease because they are protected from infection by this ribozyme,” he says. “If we can demonstrate that, then we have to figure out whether the protection is stable over the long term—over many generations.”

Fraser’s research will likely be consolidated with another research project—focusing on introducing transgenic mosquitoes into the environment—conducted by a group at the University of California Irvine.

“It’s a natural congruence. I have the effector molecule and can make transgenic mosquitoes. They’ve been studying how we can get transgenic mosquitoes to become the predominate population. We needed to come together at some point to actually bring this to fruition,” Fraser explains.

The research is something that he couldn’t have done without the support of the Gates Foundation, he adds. “They gave me the chance to explore this. I had an idea, and they funded it.”

It’s one thing to study science for the sake of science, Fraser says.

“I’d rather be doing science that will help people. Not 70 years from now, but in my lifetime. I’m very excited that I may be able to do that. We may have a way of controlling dengue fever virus in the next 10 years.”