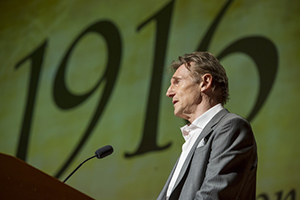 WNIT, the Michiana Public Broadcasting television station, has produced a companion series of half-hour programs to accompany “1916: The Irish Rebellion,” the three-part documentary series produced by the University of Notre Dame’s Keough-Naughton Institute for Irish Studies.

The first documentary series to give a comprehensive account of the events of the 1916 Rising in Dublin, the film has been made a centerpiece of the Irish government’s global centenary commemoration of the Easter Rising and will air on 255 U.S. public television stations as well as stations in Australia, Canada, Finland, Spain, Slovenia and several countries in South America.