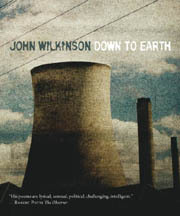 John Wilkinson, professor of literature and creative writing at the University of Notre Dame, has published a new book,“Down to Earth,”released this fall by Salt Publishing, an international award-winning publisher of poetry, fiction and literary criticism.

Through one single thematically-interrelated poem, Wilkinson addresses the disturbing state of the American Midwest and paints a bleak picture of the 21st century due to an epic of migration, the now ubiquitous borders, and the current energy crisis.The flows of capital, consumer products, waste, labor and body parts are the focus of what has been called"Wilkinson’s darkest work to date,"according to Salt Publishing.

Salt’s description of the book also states:“Like every book by John Wilkinson, ‘Down to Earth’ knows no limit to poetry’s ambition, dodging every border post, down every highway, like the ocelot running through its narratives, and struggling to create a sheltering place in often pitiless landscapes.”

A British poet who has followed careers in both mental health and English literature, Wilkinson was named a Fulbright Distinguished Scholar at the Nathan S. Kline Institute for Psychiatric Research in 2003 and a Carl and Lily Pforzheimer Fellow at the National Humanities Center in 2007.That same year, Wilkinson released his book of essays,“The Lyric Touch: Essays on the Poetry of Excess.”His current research interests include New York School poets and associated visual artists, 20th century and contemporary British poetry and theories and politics of risk.