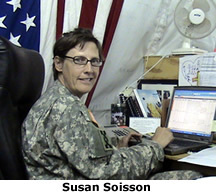 To say the least, its not a typical fall for Susan Soisson, an assistant program manager in Notre Dames Division of Student Affairs and advisor for the Student International Business Council (SIBC).

Any other year, she would be working with some of the Universitys brightest students, coordinating its largest academic student organization, and gearing up to watch some exciting Irish football.Instead, shes on military leave from Notre Dame and stationed inCamp Arifjan,Kuwait, with the U.S. Armys 336 th Transportation Group serving inOperation Iraqi Freedom(OIF).She has endured 130-degree temperatures and constant power outages and has mourned the deaths of two young soldiers in her group.

Promoted to lieutenant colonel about a year ago, Soisson joined the Army Reserves in 1992for no real reason other than trying to find a way to balance my primary role as a mother of toddlers.She found dividing her time as a mom and Army reservist in theSouth Bendarea manageable until about two years ago.

At that point I tried to transfer out and discovered I was under a stop loss,she explained. Thats a program in which the military identifies certain specialties that are needed and prevents those individuals from leaving the military for a specified period of time.

My husband, Tom (aSouth Bendpediatrician), has been amazingly supportive,she said.He is very patriotic and, for the most part, stays positive about the experience.

She keeps in contact with her four childrem – Allie, 15; Adam,13; Claire,12, and Annelyse,10 – by weekly telephone calls in which the childrenare trying really hard to put on a good front.

When shes not catching up with her family, Soisson is doing daily military mission work inIraqandKuwait.

Our transportation unit travels 100 million miles annually on Iraqi roads,she says.We transport various types of supplies and equipment to the forward operating bases inIraqand return that equipment when the unit redeploys.This mission is aided by a contracted force of non-military drivers and trucks.

Though anxious to resume her civilian life, Soisson, whose military roots run deep, is committed to fulfilling her duties.

I went into the Army after an ROTC scholarship,she said.My first assignment was in New Ulm, Germany, in 1986.That was the only other time I served overseas.I met my husband (who went to Notre Dame as an ROTC cadet) atFort Hood,Texas.Shortly after Tom and I got married, he went to Desert Storm in 1990.When he returned we decided the time to leave the Army was right. I told Tom if he survived Desert Storm, I would move anywhere he wanted and so his choice was in the shadows of the Golden Dome.We live about a mile from campus today.

I do what I can to find my role here,she rationalized.I know that God has a plan for my family and me throughout this experience, and we all are trying to recognize any benefit from this time.I have started writing a lot of poetry as a way to figure things out, and I have found a great Catholic community here.I am involved in our church service life and am working on a project to distribute school supplies to needy children here.I work with lots of great people.

Soissons unit arrived in Arifjan in July after four months of training in southernIndiana.She hopes to be home by July of next year, in time for her youngest daughter’s birthday.

It is a very long time,she said,and I pray for peace every day.