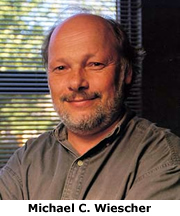 Michael C. Wiescher, Frank M. Friemann Professor of Physics at the University of Notre Dame, has been named a fellow by the Alexander von Humboldt Foundation.

The Berlin-based von Humboldt Foundation grants research fellowships and research awards to highly qualified scholars and scientists of all nationalities not resident in Germany, enabling them to undertake periods of research in Germany. It also provides research fellowships to highly qualified German scholars, enabling them to spend time at the institutes of former Humboldt guest researchers abroad.

The fellowship will allow Wiescher to study the nuclear reactions leading to the formation of an isotope of iron, 60Fe, which has been found in sediments on the deep ocean floor. The isotope is thought to be related to a supernova that occurred a few million years ago in our neighborhood of the Milky Way galaxy.

Wiescher is a world-renowned scientist in experimental nuclear astrophysics who has made numerous contributions to the determination of key nuclear rates for the understanding of stellar evolution and the synthesis of the elements in the universe. He is particularly well known for the use of novel techniques involving low energy ion beams in measuring the nuclear reactions determining the lifetime and evolution of stars.

Wiescher also has pursued the use of radioactive ion beams in measuring important reactions relevant in explosive astrophysical environments. These techniques will be implemented at the future U.S. Deep Underground Science and Engineering Laboratory (DUSEL) and the Future Radioactive Ion Beam (FRIB) facility.

He has received several honors for his research, including the prestigious Bethe Prize of the American Physical Society.

Alexander von Humboldt was a nature researcher, explorer, scientist and patron of young scholars and talents. One-and-a-half years after his death, the foundation named after him was established inBerlinin 1860. Its aim was to sponsor research travel abroad by German scholars.

After the loss of the foundations capital during a depression in 1923, it was reestablished in 1925 with the aim of assisting non-German scholars in undertaking postgraduate studies inGermany. After the collapse of the German Reich in 1945, the foundation ceased its activities.

At the suggestion of former Humboldt guest lecturers, the foundation was reestablished in 1953.