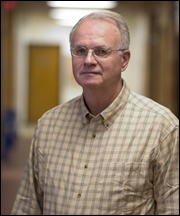 We all want to change the world.But sometimes the world changes us.

The world that changed psychology professor Thomas Whitman was that of autism.

About 10 years ago, Whitman began hearing from parents seeking help in implementing early intervention programs for their autistic children.

At the time, Whitman was unfamiliar with the condition or its treatment methods.He listened to parents describe their childrens problems and their own search for services.He became fascinated by the children and the puzzle which is autismand awed by the commitment of these families to their children.They were so dedicated, able to cope effectively and get on with their lives in the face of enormous difficulties.I learned an awful lot about what familymeans.

The parents asked that Whitman assign his psychology students to work in one-to-one intervention programs in their homes. The students responded and, eventually, credit was given for this in-home work practicum and formal autism courses were added to the curriculum.Students in these classes devote 50 hours or more each semester to their practicum, and often continue to volunteer in subsequent semesters. A student volunteer organization called Special Friends also emerged from one of those early courses.

Seeing the studentsresponse over the past 10 years has amazed Whitman.We went from helping four or five families to working with over 86 families.The students often developed deep and lasting relationships with these families, giving generously of their time, frequently finding out a lot about themselves in the process and what they wanted to do vocationally. % %

Although trained as a clinical psychologist, with a doctorate from the<?xml:namespace prefix = st1 />UniversityofIllinois, Whitmans career has focused on developmental psychology and problems affecting child development. In the 1970s, he and John Borkowski, McKenna Professor of Psychology, developed a graduate research training program, still used today, that addresses developmental disabilities. The following decade, Whitman and research collaborators found that continuous lighting in neonatal intensive care units stressed premature infants and impeded their development.The research, conducted atMemorialHospital, led to the use of cyclical lighting there and influenced the development of lighting policies in other hospitals throughout the country.

As a consequence of his involvement in autism, Whitman has become increasingly aware of the needs of children and their families. He worked with a coalition of parents, students and individuals fromMemorialHospital,St. JosephRegionalMedicalCenter, the South Bend Community School Corp., and Joint Services, (a special education arm of theMishawakaand Penn-Harris-Madison school corporations) on a plan for a new autism center. This center, called theRegionalAutismCenteratLogan, began operating last October.

Whitmans work with the community also inspired his new book,The Development of Autism:A Self-Regulatory Perspective,written for parents, professionals and students,and released last year by Jessica Kingsley Publishers. One of the themes of the book emphasizes the importance of local communities developing specialized services for children with autism and their families. Currently, he is involved in helping the local autism center develop intensive early intervention programs.

Whitman looks to a future in which the local community becomes increasingly creative in its development and delivery of educational and therapeutic services for children with autism.He is particularly hopeful about the future contributions of professionalsteachers, physicians, occupational and physical therapists, speech therapists and home health aideswho want to learn to better serve autistic children.

The real goal is specialized services for autism,Whitman says. More cost-efficient early intervention programs and better local resources for diagnosis are on his wish list.

Perhaps our thinking about autism will change, too.Maybe as we understand the disorder better,we will be more sensitive as to what children with autism are really like.

Maybe instead of us changing them, they will change us.