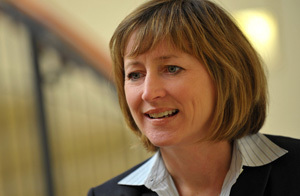 Imagine you’re a young female job candidate and are being interviewed by a male, about 32 years old. Among the questions he asks during the interview are:

Unacceptable, right? Faced with this situation, most of us would either refuse to answer such inappropriate questions or report the interviewer to his supervisor.

So why the discrepancy?

“Actions we predict we would take in the face of an ethical dilemma are different than the actions we actually take,” says Ann Tenbrunsel, a University of Notre Dame professor of management and co-author of the paper “The Ethical Mirage: A Temporal explanation as to why we aren’t as ethical as we think we are.” The paper will be published this fall in the journal Research in Organizational Behavior.

“People believe they will behave ethically in a given situation, but they don’t. Then they believe they behaved ethically when they didn’t. It’s no surprise, then, that most individuals erroneously believe they are more ethical than the majority of their peers,” according to Tenbrunsel.

Tenbrunsel calls this “ethical fading,” or the process by which a person doesn’t realize that the decision they’re making has ethical implications, therefore doesn’t include ethical criteria in the decision. In other words, the “want self” (what we desire to do) dominates and unethical behavior results. The three phases of ethical fading are prediction, action and recollection – so not only does the person act unethically without intending to do so, but he or she also recalls the action in a more favorable light.

This lack of ethical deliberation that occurs in ethical fading also can explain how an otherwise ethical and upstanding person can unwittingly engage in behaviors that they would ordinarily condemn.

“The key to preventing such behavior is understanding and recognizing when and how ethical fading occurs,” Tenbrunsel says.

“Well-meaning people with good values can go astray, and the challenge is to help people understand and prepare them for the pressures they may face when ethical questions occur.”