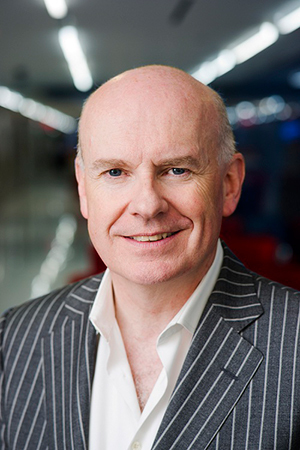 The 2016 U.S. presidential election is already shaping up to be one of the wildest in the country’s history. The campaign so far has exposed deep fissures in American politics and society, and the next four years look set to be turbulent. But what will be the implications of this remarkable election for the U.S. and the global economy?

Gerard Baker, the editor-in-chief of The Wall Street Journal and managing editor of Dow Jones, will present his view of how the upcoming U.S. presidential election might impact the world economy during a talk, “Presidential Election 2016: A Global Perspective,” at the University of Notre Dame’s Mendoza College of Business at 5 p.m. March 14 (Monday). The talk, which is free and open to the public, will take place in Mendoza’s Jordan Auditorium.

Baker has extensive experience as a journalist covering finance and economic issues for some of the world’s top newspapers. He also has had a front seat watching the U.S. presidential elections unfold, having served as a moderator to one of the Republican primary debates in November.

Baker was named WSJ managing editor in 2013, after previously serving as deputy editor to the Journal and Dow Jones Newswires, with responsibilities across the full spectrum of the company’s journalism, including the print and digital editions of the Journal as well as Newswires.

Before joining the Journal, Baker was the U.S. editor and an assistant editor of The Times of London, where he wrote news and commentary for Britain’s longest continuously published newspaper and oversaw U.S. coverage for the paper and online editions.

He also has worked for The Financial Times and the BBC, and has contributed frequently as a television and radio commentator in the U.K., the U.S. and around the world. Baker started his working life in the financial sector, first as an analyst at the Bank of England, then as an economist at Lloyds Bank in the City of London. He was educated at Corpus Christi College, Oxford University, where he graduated in 1983 with a First Class Honours Degree in Philosophy, Politics and Economics.