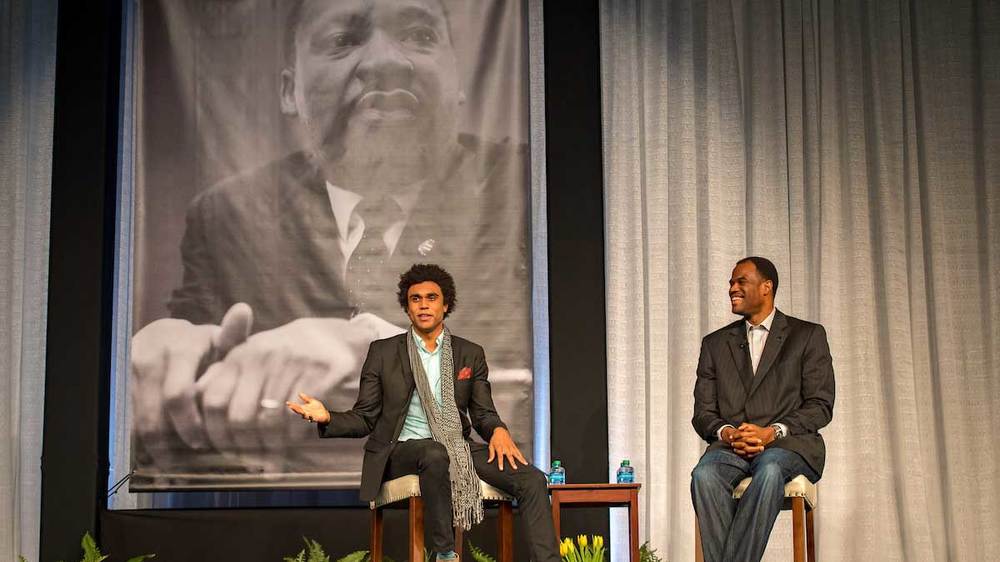 Corey Robinson ’17 and his father, philanthropist and former NBA star David Robinson engage in a discussion and Q&A as the keynote speakers at the 2018 MLK Luncheon.

Walk the Walk Week at the University of Notre Dame concluded Monday (Jan. 22) with the third annual Martin Luther King Jr. Celebration Luncheon in the North Dome of the Joyce Center.

The luncheon — sponsored by the Office of the President and the President’s Oversight Committee on Diversity and Inclusion — featured former student body president Corey Robinson and his father, retired former NBA Hall of Famer and philanthropist David Robinson, as keynote speakers.

It marked the end of a week of campus events celebrating the late civil rights leader and his legacy, from a candlelight prayer service to lectures, film screenings, open houses, art exhibits and information sessions.

The two-hour luncheon featured opening remarks from Notre Dame President Rev. John I. Jenkins, C.S.C., followed by a one-on-one discussion of grace and mercy in the context of social justice featuring David Robinson and Corey Robinson.

Father Jenkins, in his remarks, quoted both King and Howard Thurman, the African-American author, philosopher, theologian, educator and civil rights leader who deeply influenced King, in encouraging students, faculty and staff to “resist social stagnation” in the fight for social and racial justice.

“My plea to you today is to contemplate, and then as we leave, to act in ways big and small, to learn better the simple art of living as sisters and brothers,” Father Jenkins said. “In doing so, we will live life more fully and justly, we will be a richer community and we will fulfill the legacy of Dr. Martin Luther King Jr.”

For the second part of the program, Corey Robinson, a 2017 Notre Dame graduate and former football player, questioned his father on a variety of topics, from race and social justice to teamwork, community service and family history, in the style of a fireside chat.

An Olympic and NBA champion, the elder Robinson, who played professionally for the San Antonio Spurs, established Carver Academy, a charter school for San Antonio students from diverse backgrounds, in 2001. The school currently serves more than 1,100 college-bound students in south-central Texas.

“What does Martin Luther King Jr.’s legacy mean to you?” Corey Robinson asked.

“Martin Luther King Jr. is really an icon,” David Robinson said. “For me, he is the perfect picture of a man who, motivated by his faith, stepped out into the world and moved, made a difference. And he practiced grace and mercy.

“And that’s my challenge to my boys and to myself every day, practice grace and mercy,” he said. “Those are two things that I think we’re having a lot of trouble with now in this country.”

Asked what that looks like, he said, “To me, grace is just kindness given to someone who doesn’t deserve it; it’s a simple thing. Mercy is not punishing somebody for something they actually do deserve.”

Both take practice, he said.

“We have to practice grace and practice mercy and do it better and better every day,” he said. “That’s what I love about America. America is an idea. We’re not even close to what we say we are, the land of the free and the home of the brave. But we’re getting there. We’re practicing, we’re getting better. We’re treating each other a little bit better. Over the years we’ve grown up as a country and we continue to grow up.”

Notre Dame suspended classes during the luncheon. Several thousand students, faculty and staff attended the event. Others watched online or from remote locations around campus.

Campus Dining, in partnership with the Notre Dame chapter of Food Rescue U.S., donated any unused meals from the event, consisting of a selection of well-balanced box lunches, to local nonprofit organizations.