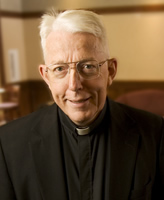 Rev. Edward A. Malloy, C.S.C., president emeritus of the University of Notre Dame, received an honorary doctor of divinity degree Sunday (May 17) from Wabash College. It was the 25th time Father Malloy has been so honored.

The honorary degree citation presented to Notre Dame’s 16th president read in part: “Father Malloy, Wabash College salutes your life as a teacher and leader; we honor your life of moral leadership, your commitment to teaching that shapes lives as well as careers, and your service to the students of the University of Notre Dame and all of higher education.”

Father Malloy retired as Notre Dame’s president in 2005. During his 18-year tenure, the University experienced rapid growth in its reputation due to substantive improvements in the size and scholarly credentials of its faculty, the academic quality and diversity of the student body, and its financial resources and physical infrastructure.

A professor of theology, Father Malloy holds three degrees from Notre Dame and a doctorate in Christian ethics from Vanderbilt University. He was ordained to the priesthood in 1970.

Father Malloy’s academic concentration on the interplay of personal morality with public policy and professional ethics informs his own active public life. He is a leading advocate of volunteerism and also has worked to combat substance abuse.