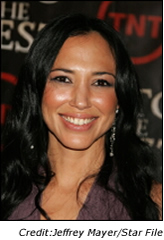 Irene Bedard, the actress, singer and activist best known as the voice of the title character in Disneys 1995 animated featurePocahontas,will deliver a lecture titledNative American Women in Film and Televisionat 7 p.m. March 28 (Tuesday) in 129 DeBartolo Hall at the University of Notre Dame.

Sponsored by Multicultural Student Programs and Services, the lecture is free and open to the public.

The daughter of an Inupiat Eskimo mother and a French Canadian/Cree father, Bedard was born inAnchorage,Alaska.Her first role as an actress was in Disney’s “Squanto: A Warrior’s Tale.”She also appeared in “Smoke Signals,” “Tortilla Heaven,” “Miracle at Sage Creek,” and “The New World.”Most recently, she was cast as Margaret Light Shines in the Steven Spielberg TV production “Into the West.”She is considered to be the most successful Native American actress in film and TV.

Bedard also sings in a band with her husband, Denny Wilson, and helped found Guardians of Sacred Lands, which promotes awareness of Native American issues.

Additional information on Bedard is available at http://www.nd.edu/~msps/upcoming.htm .