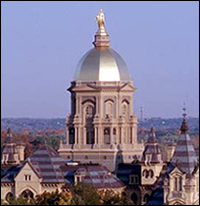 Responding to concerns expressed by graduating seniors, the University of Notre Dame has arranged for scaffolding immediately surrounding the famed Golden Dome on the Main Building to be lowered a few days before the May 15 Commencement exercises, it was announced today (April 8) by John Affleck-Graves, executive vice president.

Though we previously were told this could not be done within the time restraints for completing the regilding of the Dome and other structural repairs, we have worked very hard over the past two weeks with our scaffolding contractor, Safway Construction of Chicago, to explore every possibility,Affleck-Graves said.Fortunately, we have now reached an accommodation.

The scaffolding will be lowered just to the bottom of the Dome itself.Some seniors had objected that the construction work would ruin opportunities for traditional Commencement photos with the Dome as the backdrop.Affleck-Graves said he had met several times with Adam Istvan, student body president, and Darrell Scott, senior class president, in an attempt to work out a compromise.

Adam and Darrell have been very helpful and constructive, and I appreciate their efforts,Affleck-Graves said.We, as administrators, have empathized with their concerns, but until this week we simply could not find a practical solution.We appreciate the willingness of the contractors to think outside the box and come up with this solution, which will still allow for the project to be completed before possible frost closes our window of opportunity in the early fall.

Scott said,Although hopes were low at one point, I would like to wholeheartedly thank fellow seniors for keeping faith that an arrangement would work.Both Istvan and Scott complimented Affleck-Graves for his cooperation.

The project includes repainting and repairing of the base of the Dome as well as the statue of the Virgin Mary.Other interior, structural repairs will be made to preserve the integrity of the structure.

Later this spring, work also will begin on refinishing and repairing the spires of the Basilica of the Sacred Heart.

Affleck-Graves said negotiations with Safway will make it possible to accomplish the temporary lowering of the scaffolding and still complete the entire projectwithin our budget.He added,The contractor worked with us long and hard on this, and we appreciate their cooperation.

There will besome riskof not accomplishing the project by its mid-September deadline, said Affleck-Graves, but he said it wastolerable.

The regilding depends on ideal weather conditions.Excessive heat and humidity make the work impossible, as do windy conditions.The regilding itself will be done by Conrad Schmitt Studios of New Berlin, Wis.