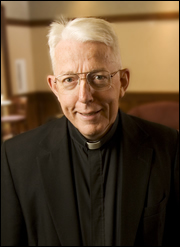 TitledMonk: Teacher, President, Priest,the video, which was shown at a fund-raising tribute to Father Malloy on March 3 at Century Center in downtown South Bend, chronicles the childhood, personal and professional life, tenure and legacy of the Universitys 16 th president.

Completing his 18 th year as Notre Dames president, Father Malloy will step down at the end of his current term, June 30. Under his direction, the University has experienced rapid growth in its reputation due to substantive improvements in the size and scholarly credentials of its faculty, the academic quality and diversity of the student body, and its financial resources and physical infrastructure.

Father Malloy is a professor of theology and, throughout his presidency, has continued to teach. Ordained to the priesthood in 1970, he holds three degrees from Notre Dame and a doctorate in Christian ethics fromVanderbiltUniversity. He is the recipient of 21 honorary degrees, including a doctoral degree presented as a surprise at last months Notre Dame Commencement.

Father Malloy is a leading advocate of volunteerism and has served on numerous boards dedicated to community service, including Campus Compact, Boys&Girls Clubs ofAmericaand the Points of Light Foundation.He also has worked to combat substance abuse through service to the National Advisory Council on Alcohol Abuse andAlcoholism, theNationalCenteron Addiction and Substance Abuse and other organizations.

After stepping down as president, Father Malloy plans to take a sabbatical, followed by a renewed commitment to teaching, writing, pastoral ministry and service on boards of various not-for-profit organizations.

The video was produced by Big Idea Company ofSouth Bend.