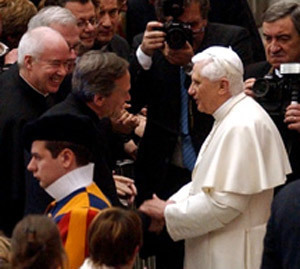 A taped video stream of the recent gathering at which Rev. John I. Jenkins, C.S.C., president of the University of Notre Dame, met Pope Benedict XVI may be viewed on theVaticans Web site.

Father Jenkins and some 50 Notre Dame Trustees, officers and their spouses attended the Feb. 1 general audience in theVaticans Paul VI Auditorium, after which the pope shook hands with Father Jenkins and called Notre Damea great Catholic university,and the president asked the pope to pray for Notre Dame.

The Universitys Board of Trustees held its annual winter meeting in Rome during the first week of February and hosted an academic convocation onThe Contribution of Catholic Universities to the Church and Cultureat which honorary doctor of laws degrees were presented to L. Francis Rooney III, U.S. Ambassador to the Holy See, and the Most Rev. Rino Fisichella, auxiliary bishop ofRomeand rector ofSt. JohnLateranUniversity.

The link to the video stream is: http://www.vatican.va/news_services/television/multimedia/archivio_it.html