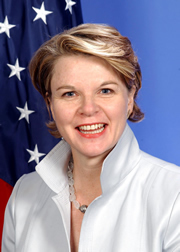 Margaret Spellings, U.S. Secretary of Education, will be the principal speaker at the 11th annual graduation ceremony for the University of Notre DamesAlliancefor Catholic Education (ACE) program July 15 (Saturday) at2 p.m.in the Leighton Concert Hall of theDeBartoloCenterfor the Performing Arts.

The ACE program will graduate 88 teachers this year for service in beleaguered Catholic schools nationwide.They will join some 640 ACE alumni, the majority of whom remain in education, either as teachers or administrators.

Prior to her confirmation as the eighth secretary of education in January 2005, Spellings served during the first term of the Bush administration as assistant to the president for domestic policy.In that position she helped shape education policy initiatives including the No Child LeftBehind Act. She also helped develop administration policies on other domestic concerns, such as immigration, health, labor, transportation, justice and housing.

John and Rosemary Croghan and Monsignor Ken Velo, all ofChicago, will receive the 2006 Notre Dame Award for Outstanding Contributions to Catholic Education during the ceremony.The Croghans have been prominent supporters of Catholic schools inChicago, particularly of Cristo Rey, which serves the Mexican-American population of the Pilsen neighborhood.Monsignor Velo directs the Big Shoulders Fund, which raises and distributes money to make Catholic education available to needy families.

Founded in 1994 by Rev. Timothy R. Scully, C.S.C., and Rev. Sean McGraw, C.S.C., the ACE program provides college graduates an opportunity to earn master of education degrees while serving as teachers in understaffed Catholic schools nationwide.In exchange for a modest stipend and a tuition-free graduate program, ACE participants make a two-year commitment to teach in these schools.

More than 85 recent college graduates from a wide variety of educational disciplines enter ACE each year.They take courses and participate in teacher training projects at Notre Dame during their two summers in the program and are assigned to full-time teaching positions at schools in some 30 cities in 14 states during the school year.After two years, the students graduate with a master of education degree and 75 percent elect to stay in education.