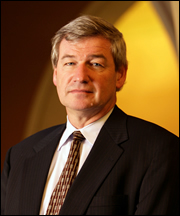 CIO magazine announced today that the University of Notre Dame is a recipient of the 2005 CIO 100 award, an annual honor that recognizes organizations that exemplify the highest level of operational and strategic excellence in information technology (IT).

The 2005 award theme, theBold 100,cites organizations that embrace great risk for the sake of great reward. The magazine recognized Notre Dames Office of Information Technologies for simultaneously implementing a major infrastructure upgrade (including a new data center and Wi-Fi initiative) while replacing mainframe-based legacy systems with a distributed system. The magazine cited the Universityfor having the drive to reach for the prize, the guts to embrace the dangers, and the discipline to create a mitigation plan and stick to it.

This award is a testament to the hard work of many, many people across the University, and to the tremendous support for their efforts offered by the university leadership,said Gordon Wishon, chief information officer, associate vice president and associate provost.At every turn in this very complex and highly interdependent series of projects, departments from all across the campus came together to find solutions to the collective challenge brought about by our attempt to replace or upgrade virtually every aspect of the IT infrastructure in one massive effort.

The recipients of this years CIO 100 award were selected through a three-step process. First, companies completed an online application, detailing their bold practices in both business and IT. Next, teams of CIO magazine editors and writers reviewed the applications in depth, looking for unique practices and substantial results, Finally, the teams met for a daylong meeting to debate the merits of each nominee and vote on the final 100.

Bold 100 honorees will receive their awards during a gala dinner at the conclusion of the CIO 100 Conference and Symposium, to be held Aug. 21-23 at the Hotel del Coronado, inCoronado,Calif.

Launched in 1987, CIO magazine addresses issues vital to the success of chief information officers worldwide. It provides technology and business leaders with analysis and insight on information technology trends and ITs role in achieving business goals.