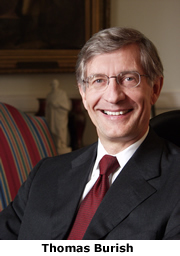 Thomas G. Burish, provost and professor of psychology at the University of Notre Dame, will receive an alumni award Friday (April 13) from theUniversityofKansas, where he earned his masters and doctoral degrees.

TheCollegeofLiberal Artsand Sciences at KU will honor Burish and four other graduates with the Alumni Distinguished Achievement Award for contributions to their communities, professions or the university.

Burish was elected provost of Notre Dame on July 21, 2005.He is the fourth person to hold the office since it was established in 1970.The provost, the University’s second ranking officer, is elected by the Board of Trustees and, at the direction of the president, exercises overall responsibility for the academic enterprise.

A Notre Dame alumnus and distinguished scholar in the field of clinical psychology, Burish served as president ofWashingtonandLeeUniversityfor three years before assuming his present position and wasVanderbiltUniversitys longest-serving provost from 1993 to 2002.

After his graduation from Notre Dame in 1972, Burish, a native of Peshtigo, Wisc., earned masters and doctoral degrees in psychology and clinical psychology from KU in 1975 and 1976, respectively. While in graduate school, he also worked in the KU Medical Centerspsychiatry department and children’s rehabilitation unit.

In 1976, Burish joined Vanderbilts faculty as an assistant professor of psychology.He taught undergraduate courses in abnormal psychology, personality, introduction to delivery of psychological services, stress and biofeedback, and graduate courses in psychopathology, health psychology, and clinical practicum.He remained at Vanderbilt for the next 26 years, establishing a prominent reputation in cancer research, receiving honors for excellence as an undergraduate teacher, and serving in numerous administrative positions, including chair of the Department of Psychology from 1984 to 1986.

Burish has served as a member and president of the American Cancer Societys national board of directors and also sits on numerous scientific advisory committees. He is the co-author or co-editor of four books, includingCoping with Chronic Disease: Research and ApplicationsandCancer, Nutrition, and Eating Behavior: A Biobehavioral Perspective.